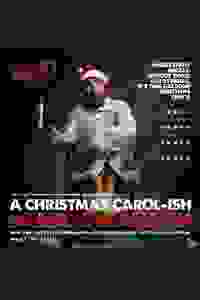 Mr. Swallow returns to the Soho Theatre (and a string of successful and unsuccessful magic acts) with a musical retelling of Dickens’ 'A Christmas Carol'!

With co-stars Mr. Goldsworth and Jonathan, they are joined by P&O Ferries lounge singer Rochelle, as they delve into Christmas chaos!

See it if You enjoy theatre that is self-aware and meta. You see its "seams" and it comments on itself.

Don't see it if You want a high budget show honoring this seasonal classic.

"The characters observe that it's quite confusing – metatheatricality is a lot of fun but needs careful consideration to transcend simple larking about."
Read more

“There is a slapdash charm woven into A Christmas Carol-ish. From the anarchic meta-theatricality of a panto within a panto, to the set and props, it is sure to win any Scrooge over, especially with Mohammed’s endless onstage magnetism”
Read more

" ‘A Christmas Carol-ish…’ could have been horrendously Footlights, but Mohammed, Hadland, David Elms, Kieran Hodgson can all really act, dance and sing."
Read more

" 'A Christmas Carol…ish' is a load of nonsense, but nonsense with flashes of brilliance, and it goes down nicely with a cupful of mulled wine."
Read more

"It all builds to a spectacular finale in which Mohammed — a member of the Magic Circle — sprinkles a little fairy dust. It’s a festive fever dream — and I couldn’t stop smiling."
Read more

Your guide to London Christmas Shows in 2022
Read more