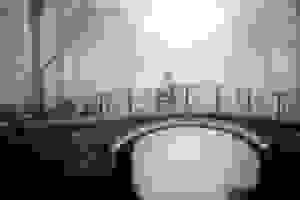 The UK premiere of an audacious thriller from Israeli playwright Maya Arad Yasur.

Everyone knows, all of them … that when all’s said and done, she is no more than a fig leaf hiding the thing everyone else would be much happier never having to look at.

One day a mysterious unpaid gas bill from 1944 arrives.

Slid her an envelope right under the door and then just walked away.

It awakens unsettling feelings of collective identity, foreignness and alienation. Stories of a devastating past are compellingly reconstructed to try and make sense of the present.

The UK premiere of a strikingly original, audacious thriller.

Maya Arad Yasur is a prize-winning Israeli playwright, whose work has been produced worldwide.

This is Matthew Xia’s first production as Artistic Director of ATC, co-producers of the critically acclaimed Winter Solstice at the OT. He recently directed Blood Knot at the Orange Tree Theatre.

Don't see it if If you want to be happy