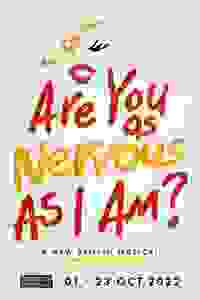 View in admin
Are You As Nervous As I Am? (London)
London: Greenwich
1
Score it Scored!

Are You As Nervous As I Am? (London) London Reviews and Tickets

Fighting against their mother’s dysfunctional behavior, Peggy and Janet are forced to pursue lives apart & away from their home in Wales.

The two have their own demons but are desperately trying to break unhealthy childhood patterns, find independence and build the loving families they've always wanted.

Written by Simon Spencer, with music by Leighton James House and lyrics by Shaun McKenna.

See it if You enjoy good-quality singing and enthusiastic performances. The actors did what they could with the material and their talent shone.

Don't see it if You want any kind of meaningful character or thematic development or distinguishing songs.

"Stories of female solidarity can make powerful, uplifting viewing but not here, where the characters are so sketchily drawn and generally unlikeable, and any depth of feeling between the sisters barely makes it across the footlights. "
Read more

"It has enough likability and musicality to balance out a rather clunky execution and a reliance on some familiar tropes."
Read more

"With 'Are You As Nervous As I Am?,' I truly believe there is a great show in there. A great cast and some stunning songs still make this a wonderful couple of hours if not completely unproblematic."
Read more