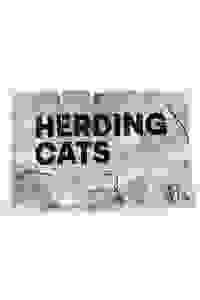 A revival production of Coxon's dark yet humorous play about disconnectedness in modern life.

"Herding Cats" follows flatmates, Michael and Justine. Michael earns a living through offering phone sex to clients such as Saddo via a chatline agency. Justine has a challenging but well-paid job and often complains to Michael about her irritating boss. Lucinda Coxon's high energy play explores sex, intimacy and loneliness. Antony Banks (The Girl on the Train) directs the revival production in which two members of the cast perform on Soho's stage in London while the third actor performs via video from the United States. The Soho Theatre welcomes audiences back into its venue for this live production. Performances will also be available to watch via live stream.

See it if You love singing and dances as well as cats.

Don't see it if This musical could get quite confusing at points because it is all communicating through song.

A decade ago, when Banks directed the generously reviewed premiere, it’s just about possible, I suppose, that the depiction of urban angst and heavy breathing on the internet might have seemed daring and original. It’s certainly anything but now.
Read more

One of the defining elements of post-pandemic society has been a dependence on technology, and Coxon's play is one that shines in this context rather than bending its form to be accommodated.
Read more

But [Herding Cats] is a wise piece of programming that empathetically channels the emotions of Coxon’s play, while showing the potential of dual theatrical and digital experiences.
Read more

[Sophie Melville], since Iphigenia in Splott, is fast proving one of the best British actors of her generation...[Herding Cats is] a slick technical feat and the play still prickles under the skin as Coxon expertly examines a generation who discover walls closing in on them rather than horizons opening up.
Read more