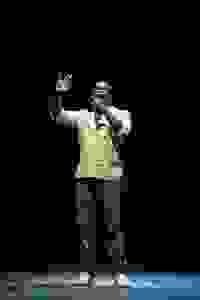 View in admin
Mugabe, My Dad & Me
London: Brixton
Score it Scored!

Mugabe, My Dad & Me London Reviews and Tickets

Tonderai Munyevu's personal take on the rise & fall of one of the most controversial politicians of the 20th century.

The British colony of Rhodesia became the independent nation of Zimbabwe in 1980. Tonderai Munyevu is part of the new generation from this newly established country with a newly minted leader, Robert Mugabe.

Interspersing live music, storytelling and some of Mugabe’s speeches, this one-man show explores identity, familial love, and the notion of home.

Shortlisted for The Alfred Fagon Award 2019.