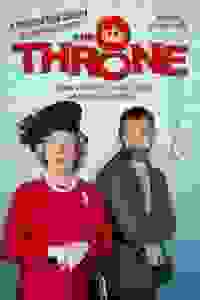 John Goldsmith's new comedy about a staunch republican thrown into a life-or-death situation with the Queen.

It's 2002, and the staff & pupils of Dudley Goring Comprehensive School are eagerly awaiting the arrival of Her Majesty the Queen, who is due to open the new science block.
However, Derek Jones - the Head of Science and a republican - is less than impressed. He decides to use the portaloo installed especially for the Queen's personal use, when he is caught by Her Majesty herself. But embarrassment turns into fear as the two discover that a bomb has been planted underneath the toilet, and will detonate if either of them attempt to leave ...

See it if a small production but it works .it advertised a a comedy but i didnt find it funny, a very interesting through , its worth seeing

Don't see it if you wont to be truly entertained , but if need to do something then give it a try

See it if very clever and absorbing, a delightful evening

Don't see it if if you are a royalist

"There is some charm but not many actual laughs and the humour is not nearly biting enough. The pace is slow, verging on sleepy, with light, whimsical conversation that skims across the touch-points without bringing much to them... "
Read more

"You can’t help wishing someone had taken some dynamite to the script ... It’s hard to imagine the outline getting past the first few minutes of a story conference. The characters may be hemmed in by explosives, but there’s no sense of menace, no tension and precious little in the way of whimsy."
Read more

"Anthony Biggs’ solid direction makes the best of the few comic moments, but this comedy is crying out for a broader treatment or at least a glimpse of the chaos beyond the Portaloo."
Read more