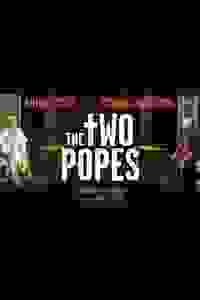 The London premiere of the stage adaptation of the critically acclaimed movie.

Nine years ago, Pope Benedict XVI stunned the world by resigning, the first Pope to do so in 700 years. What drove this traditionalist to break with sacred tradition and make way for a reformer, to become Pope Francis?

Anton Lesser ('Game of Thrones', 'The Crown') and Nicholas Woodeson ('Baptiste', 'The Death of Stalin') star in this adaptation of the Academy, Golden Globe, and BAFTA Awards-winning film of the same name.

"The momentous events and issues it deals with, the whole thing feels oddly bloodless, but at least the timing is apposite."
Read more

"Elevated by strong central performances and a visual language grand enough to match its knotty, thoughtful text, 'The Two Popes' is a stylish, if sometimes sluggishly paced, piece."
Read more

"...two men whose lives are as distant from our own as one could imagine, tell us much about our own thoughts and attitudes. That’s plenty enough truth for me and, I suspect, most others, who will enjoy an evening of grown-up entertainment that delights and intrigues in equal measure."
Read more