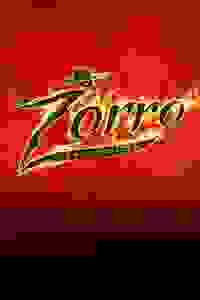 The Gipsy Kings and John Cameron's musical adaptation of the story of the infamous masked crusader.

Set in 1805’s California, a town is under attack from its tyrannical leader. When the danger is at its greatest, El Zorro appears out of nowhere and saves the lives of many!

Through murderous encounters, flamenco and music, 'Zorro' tells the story of the hero behind the mask. Featuring international hits by Gipsy Kings including Bamboleo, Baila Me and Djobi Djoba, as well as original music.

A co-composition by John Cameron and a new Adaptation by Christian Durham.

Don't see it if You don't like whimsical and want a strong storyline.

See it if if you like predictable story points

Don't see it if you like clear musicals with logical scoring, character development and cannot tolerate interesting takes on accents.

See it if We saw it years ago ,but had forgotten the story, a bit different with a central stage. Good fun evening

See it if Love the gipsy kings' music, flamenco dancing and the Zorro franchise

See it if Very underspend. Didn't no about it and only booked at last minute. Very uplifting and powerful production and inspiraling

A young cast of actor-musician-flamenco dancers clatter enthusiastically through a tale that’s jokily slapdash one minute, breast-beatingly po-faced the next. They bring more polish to the show than it deserves. There are more Hispanic clichés than you can shake a castanet at.
Read more

Durham’s production is a celebration of storytelling and he has gathered a diverse and multi-talented cast to pull it together. Benjamin Purkiss has the presence and stamina to master the title role. His Diego is a quick-witted clown, but in hero mode as Zorro, Purkiss oozes charisma.
Read more

Okay, it's not Les Mis for all the parallels, but there’s plenty of scope for fun and a bit of exotic otherness – and, it must be said, wobbly Spanish accents. Some of it works, some of it doesn’t, which, if you’re going for a runtime of well over two and a half hours, is hardly unexpected.
Read more

And yet, despite some dramatic shortcomings, this stage version of Zorro delivers entirely what is expected of it: epic romance, stimulating swordplay and an almost unsettlingly heavy dose of onstage fire, all while musicians among the cast punctuate it with European musical flair – I doubt audiences will be leaving the Charing Cross Theatre dissatisfied after watching this masked musical.
Read more

The whiff of hamminess is never absent from the Zorro films and here both script and performances are endearingly alive to a sense of the ridiculous...The problem is that, aside from swaggering masculinity, the characters of the duelling antagonists feel more flimsily set up than the plywood facades of a spaghetti western.
Read more