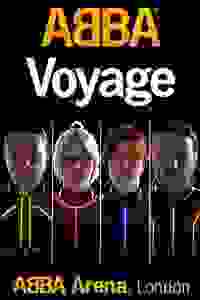 Benny, Björn, Agnetha, and Anni-Frid have created a one-of-a-kind concert, with virtual avatars (ABBAtars) of themselves as they looked and sounded in 1977, performing in front of a live crowd for the first time since the band went their separate ways in 1982.

ABBA Voyage brings the group to life using the latest in motion capture technology, accompanied by a live band.

Including performances of some of ABBA's classic hits, including 'Knowing Me, Knowing You', 'Waterloo', 'Chiquitita', and 'The Winner Takes It All', plus songs from their new album including 'I Still Have Faith In You' and 'Don't Shut Me Down', ABBA Voyage is an ABBA concert like the world has never seen before.

This production is recommended for ages 6+ - children under the age of 3 will not be admitted.

See it if The amazing technology that made this as close to real life as ever possible. The total enjoyment of making the whole experience into a

Don't see it if …you don’t like their music or would only be looking for anything other than exciting and euphoric experiences.

See it if You love ABBA or want a big dance party. Love fresh ideas which look amazing and move the audience to sing, dance and jump around

See it if 100% worth the money, you forget that it’s not actually them on the stage! So brilliant and such an incredible atmosphere

See it if You love ABBA, are interested in the technology or just want to dance. It is irresistible.

Don't see it if you don't want to have a good time. You don't need to like ABBA, but you have to give into it and enjoy the voyage

See it if You are an Abba fan. It’s an utterly immersive and joyful experience.

See it if You have an appreciation for ground breaking technology in an astounding and beautiful ‘live’ show built around the ABBA songbook.

Don't see it if If you don’t like ABBA !

See it if We liked everything about ABBA, it really was fantastic from beginning to end a very happy experience.

Don't see it if Absolutely nothing Read more

" 'ABBA Voyage' is a feat of technological excellence so effective in its deceit that it will surely pave the way for likeminded productions."
Read more

" 'ABBA Voyage' preserves their achievement as the world’s greatest pop band forever, and fans will be able to take leave of their senses to the chorus of “Gimme Gimme Gimme” for as long as they still want to."
Read more

"When there’s a chance to see ABBA 'live' and experience the musical euphoria of generations past, it’s easy to forgive any odd appearances. There’s no denying that the Swedish superstars are in the room."
Read more

All That Dazzles (UK)

" 'ABBA Voyage' is a show like no other. Technically advanced and perfectly executed, this pushes the boundaries of what can be achieved with a live show. "
Read more

"It will never replace real people. But it is still memorable and dazzling, and it was breathtaking entertainment."
Read more

" 'Abba's Voyage' is fantastic, and I highly recommend it. But it still makes me nervous. One day, if we're not careful, all gigs will be like this."
Read more

"There’ll be no need to tell our grandchildren about the great bands of our youth. They could all still be on stage, forever young thanks to miraculous work like this."
Read more