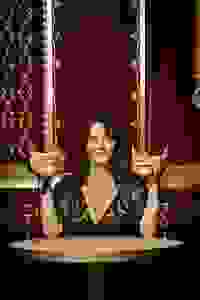 Nina Conti, the queen of ventriloquism, brings audiences a new dating show with a twist.

Conti first started on the comedy circuit in 2001 and has been entertaining audiences with her ventriloquist act for over 20 years. In 2013, Conti won the British Comedy Award for Best Female. In addition to her stage work, Conti's has also worked in film. In 2012, her film 'Her Master's Voice' was nominated for a Bafta for Best Single Documentary.

See it if You are a fan of Nina's previous shows. She is a very smart comedian/entertainer and due to audience participation every night is different.

Don't see it if You are easily offended. The topics covered are considered adult, so this isn't a show for younger audiences either.

There’s that famous line about Fred Astaire and Ginger Rogers: yes, he was great, but “she did everything he did, backwards and in high heels”. Watching Nina Conti’s act is like watching one woman be Fred and Ginger.
Read more