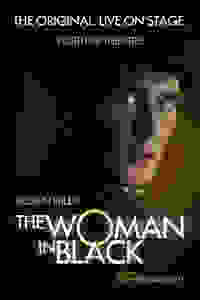 View in admin
The Woman In Black (West End)
London: West End
77
Buy tickets from £26 on TodayTix
Score it Scored!

The Woman In Black (West End) London Reviews and Tickets

When lawyer, Arthur Kipps, is sent to put the affairs of an estate in order, he realises that he may not be in the house alone.

The Woman in Black first premiered on the stage in 1987 and transferred to the West End two years later. Residing at the Fortune Theatre on Drury Lane, the two-man play has been an audience favourite for decades. This production is recommended for ages 12+.

See it if Old fashioned 2 person show. Some fun startles. Only matinee on a Tuesday.

Don't see it if At 1hr 50 min a 20 min intermission was uncalled for. Slow especially on start. Sometimes confusing.

See it if You have nothing else to see.

Don't see it if You are expecting it to be scary. It was not suspenseful & only had a couple moments of ‘jump scares’ provoked by sound effects. Read more

See it if You enjoy seeing a horror on stage. This is a very hard genre to tackle.

Don't see it if You are expecting to be scared the entire time. It’s not like going to a haunted house but more like hearing a scary ghost story Read more

See it if you want to see a relatively simply staged show that tells a brilliant, dark story. More spooky than scary as a horror and some great acting

Don't see it if you don’t enjoy dark and potentially frightening tales or conversely you want a more full blooded horror that will leave you terrified. Read more

See it if Its fantastic to see a ghost story played out on stage. The effects were pretty strong at creating a eerie atmosphere.

Don't see it if If you don't enjoy slow burn horror or hauntings, if you're the kind of person who can't suspend disbelief for haunted houses

See it if you enjoy an eerie tale. Chillingly stylish ghost story grips you with the anticipation of fear & spooky. Wonderful performances

See it if you wanna relax into a story

See it if You enjoy an intense show with minimal staging

Don't see it if You don't like being frightened

The Woman in Black tells its supernatural tale in a unique way using basic props and allowing the audience to use their imagination to create a truly fearful horror story. The tension is high and sudden the ‘jump out of your seat’ moments come thick and fast!
Read more

Yet the shrieks and gasps that greet the performance demonstrate that, even in the twenty-first century, this doughty little drama still casts its delicious spell of malevolence and menace.
Read more

The old stories are always the best - and this one has lost none of its power to terrify.
Read more

It is a clever tale that is full of surprises and suspense...It is not hard to see why this show has lasted so long, I sincerely hope that it makes it through another 3,000 performances.
Read more