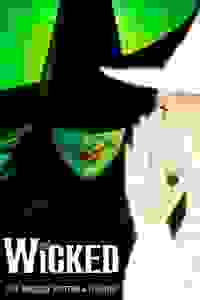 Stephen Schwartz's long-running hit musical about the untold story of the Witches of Oz.

A musical adaptation of Gregory Maguire's best-selling 1995 novel. 'Wicked' explores the backstories of the Witches in the Land of Oz long before Dorothy arrived and how Glinda came to be known as 'Good' and Elphaba as 'Wicked'.

A big hit with audiences, 'Wicked' is the ninth longest-running musical in the West End. The musical has won over a hundred major theatre awards including two Olivier Awards.

With music and lyrics by multi-award winning composer Stephen Schwartz ('Prince of Egypt', 'Godspell', 'Pippin'), written by playwright Winnie Holzman ('Birds of Paradise') and directed by Tony Award-winner Joe Mantello ('The Boys in the Band', 'The Normal Heart'). 'Wicked' is recommended for ages 7+.

See it if you want to see a show with some iconic songs, great belts and a dash of comedy. Very child/teenager/family friendly.

Don't see it if you're going for the hype- you might be disappointed. It's also tough to feel immersed no matter where you sit in the cavernous Apollo.

See it if You hated the book

Don't see it if You LOVED the book

See it if You love a big musical extravaganza

See it if you love musicals

Don't see it if your expecting wizard of oz

See it if EVERYONE SHOULD SEE THIS SHOW. It is dazzling, breathtaking, and just a brilliant show. Full of fun but also emotional.

Don't see it if There is no reason not to see this show, it’s fun, it’s sad, it’s everything you possibly want with amazing music, costumes, set, everything

See it if you want to see the untold story of the witches of oz. This a great show for all the family and a must see for anyone visiting London.

Don't see it if dislike the wizard of oz and associated characters or mainstream mass market musicals.

Don't see it if Plot focussed

See it if you love shows with a large ensemble, powerful songs and big sets and costumes.

Don't see it if you don't like dramatic musical numbers or want a more serious show.

“Although it has been a hit in New York, it seems all too typical of the modern Broadway musical: efficient, knowing and highly professional but more like a piece of industrial product than something that genuinely touches the heart or mind...’Wicked’ lapses into knowingness and moralism...Worse still, the musical decides it has to make a public statement about the importance of sisterhood...Admittedly, the show is well performed.”
Read more

“Schwartz’s score, arguably his best so far, is an ebullient mix of grandiose anthems and lyrical ballads while Winnie Holzman’s book expertly blends fairytale whimsy with broad moral issues. Much of the appeal of the story is our recognition of so many memorable characters...A fine ensemble company fizzes with Broadway pizzazz.”
Read more

“A solid West End favourite. We’re definitely not in Kansas anymore for this heartwarming prequel of ‘The Wizard of Oz’, showing us why the Wicked Witch of the West turned out to be such a meanie...It has some seriously heavyweight casting history...The show’s big banger is ‘Defying Gravity’...A must-see for anyone hoping to sample a modern musical classic.”
Read more

“Unexpectedly witty, enjoyable though far from flawless...At times the show undoubtedly slips into the preachy, but mercifully Holzman's script keeps the gags coming...Schwartz's lyrics are occasionally touched with wit, but what he really specialises in are big gloopy power ballads that allow the two female leads to...soar...At times it's a bit of a mess - but it proves far more enjoyable than I had dared to hope, and deserves a wider audience than adolescent schoolgirls.”
Read more

“This stylish and bombastic musical still delivers, sailing over its patchy score thanks to a gravity-defying performance from its current leading lady Tucker...She's closely followed by Beck...The Tim Burton-inspired ensemble oscillate between the hypnotic and grotesque...As in classical ballet, this is all about the women and, even by previous lead Menzel's standards, they are in soaring form here.”
Read more

What is WICKED Truly About?
Learn about Show-Score's most frequently reviewed show: the Broadway sensation, WICKED! The unique take on the classic story &quot;The Wonderful Wizard of Oz&quot; will really blow you away. Read more