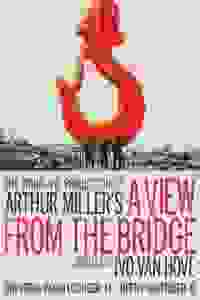 View in admin
A View from the Bridge
NYC: Midtown W
88
Score it Scored!

A View from the Bridge NYC Reviews and Tickets

In Brooklyn, longshoreman Eddie Carbone welcomes his Sicilian cousins to the land of freedom. But when one of them falls for his beautiful niece, they discover that freedom comes at a price. Eddie’s jealous mistrust exposes a deep, unspeakable secret – one that drives him to commit the ultimate betrayal. This lauded production is a transfer from London’s West End where it won the 2015 Olivier Awards for Best Revival, Best Actor and Best Director. This is the Broadway debut of auteur director Ivo Van Hove.

See it if you like van Hove's modern approach. Works for AVFTB, but not Crucible. I missed 50s setting, but liked the focus on words. Strong acting.

Don't see it if you like traditional prodns of classic plays. The barebones staging w sound effects can detract. Mostly, it showcased the powerful emotions. Read more

Don't see it if If you don't like intense drama.

See it if Saw it with Tony Lo Bianco, was one of the best plays I ever saw. It was better then recent one. It was well directed, staged. All actors in

Don't see it if If you do not like drama.

See it if you like gripping, dramatic theater that holds your attention in a refreshing staging that captures the power of the play,

Don't see it if you need 100% realistic sets in order to enjoy, don't like to pay attention to language and little details

See it if you are riveted by brilliant set, moving music/soundtrack, precise choreography and excellent ensemble; production that blows you away

See it if You've never seen this play before and like bold American plays.

Don't see it if You've seen earlier productions of this work. Despite the reviews, this staging does not really improve the work.

See it if you like well-written tragic American dramas given an excellent avant-garde makeover by Ivo Van Hove.

Don't see it if you need the physical production to be realistic in order to buy into what's happening.

"Ivo van Hove’s magnificent reconception of Arthur Miller’s 'A View From the Bridge,' takes you into extreme emotional territory that you seldom dare visit in daily life. At the end of its uninterrupted two hours, you are wrung out, scooped out and so exhausted that you’re wide awake...Mr. Strong’s is the most powerful single performance you’re likely to see this year."
Read more

"The lack of clutter is certainly chic, but without the furniture and props Miller specified, some points are unclear…What makes this slight misfit of play and production finally unimportant is that the actors are so devastatingly good…Some of the credit for the cast’s superb work obviously belongs to van Hove; he knew he needed actors who could stand up to his powerful, showy interventions. It’s a fair trade; those interventions probably made this revival viable."
Read more

"Ivo van Hove's stunning reappraisal of the 1956 Arthur Miller drama is led by a knockout performance from Mark Strong…Performed by a sizzling ensemble led by Mark Strong, this is powerhouse theater that leaves you breathless…Van Hove strips the play down to its raw bones…By peeling away the real-world trappings, the production releases something primal in Miller's drama."
Read more

"The dirge-like music that underscores the entire production can grow tiresome and sometimes heavy-handed…As for Eddie, Strong is fiery-eyed and fiercely unsympathetic. He goes for the jugular, but not our heartstrings...If you find yourself dry-eyed at the end of van Hove’s high-concept, low-frills production, there’s no need to check your pulse. And if you find yourself relating to Eddie, there’s no need to panic; that means Strong (and Miller) succeeded."
Read more

"Breathe, everybody, breathe! Audiences really need to be reminded of that at the end of Ivo Van Hove’s magnificent production…The show, anchored by a towering performance from Mark Strong as a longshoreman whose willful blindness causes his whole world to come crashing down, is both visually gorgeous and an emotional wipeout…Strong scales those heights, giving an electrifying performance of raw power and terrifying beauty."
Read more

"Mr. Van Hove...doesn’t seem to care whether any of his over-familiar avant-garde tricks are organically related to the script. Instead, they’re poured over it like a rancid sauce...What you find underneath is a staging that gets to the point of Miller’s play with near-naturalistic directness. Not only does he move actors around fluidly, but he also knows how to pick them...Unfortunately, he neither trusts them nor the play, which is pretentious in its own way."
Read more

"Director Ivo Van Hove’s revival of Arthur Miller's 'A View From the Bridge' not only has all of these elements, but sets a new standard on what theatre can be…This show is a once-in-a-lifetime production and truly a great achievement of Van Hove and his cast and crew. Go see this show—you will come away from it completely exhausted but fulfilled."
Read more