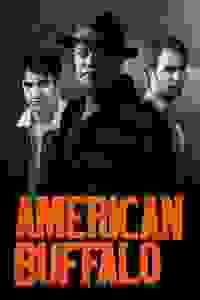 In this 1975 David Mamet classic, junk shop owner Don (Laurence Fishburn) has just sold a unique buffalo nickel for $90, but worries he could have sold it for much, much more. Desperate to cash in the full value of the rare item, Don and his employee plot to steal the coin back. Then an old poker buddy arrives on the scene, encouraging them to think bigger than just stealing one coin. Distrust begins to boil as the plans begin to fall apart, and greed may just get the best of them all.

The revival was nominated for four Tony Awards--Best Revival of a Play, Best Direction of a Play for Neil Pepe, Best Performance by an Actor in a Leading Role in a Play for Sam Rockwell, and Best Scenic Design of a Play for Scott Pask.

This is the fourth Broadway production of the play, which first appeared on Broadway in 1977 and then again in 1983 and 2008.

See it if Rockwell is a standout. Old story but a good one. Saw in 81 with pacino..Pacino... Rockwell was just as good.

Don't see it if Old school language had some wokesters heading for the door.

See it if The cast of this show was the top reason I went to see this. The story starts with the sale of buffalo nickel and things turn upside down.

Don't see it if Language, one violence set. if you want singing and dance.

See it if you like a well acted comedy drama with good staging. Laurence Fishburne and Sam Rockwell give stellar performances.

Don't see it if you don't like violence on stage. Some of the dialogue is funny but the characters' actions are not. Read more

See it if You love Mamet, and/or these actors. Rockwell and Criss are especially compelling.

Don't see it if You’re not a Mamet fan and don’t understand why his plays are revived so often. This play is nothing more than a mediocre TV episode.

See it if you want to see quality acting. All three actors are terrific in this show, with Rockwell stealing it. The dialogue is sharp and clever.

Don't see it if too much testosterone on stage turns you off. This is a “masculine” show in theme and in performance. (To think I saw POTUS just yesterday.)

See it if great acting and staging are enough for you

Don't see it if You are expecting a meaningful story. Unfortunately this is how David Mamet operates sometimes. Read more

See it if This clever hilarious classic David Mamet play is cast and acted perfectly ! The 3 incompetent petty crooks are a joy to watch !

Don't see it if The only reason not to see this gem of a play is if you can’t tolerate the very raw language. It is one of Mamet’s best !

"When 'American Buffalo' first hit the stage, in Chicago in 1975, its portrait of lowlifes like Teach — two-bit grifters aping the realpolitik of American business — was a game changer. Though it did not quite induce sympathy for a man who would strike a kid in the face with an iron, it did make audiences queasy about the respectable entrepreneurs whose behavior Teach was translating to his own turf. In language as crass and cadenced as gunfire, Mamet turned their man-eat-man philosophy, which some call capitalism, into brutal prole poetry: a poetry of predation, you might even say."
Read more

"Directed by Neil Pepe with the expert eye for appraisal that the characters lack, this production is vastly superior to 'American Buffalo’s' last Broadway incarnation, which ran briefly back in 2008. The play itself, which marked Mamet’s breakthrough, is as thin as a dime, but it’s got great atmospherics. Scott Pask’s set and Dede Ayite’s costumes plunge us into the shabby world of the action; seated around the thrust stage at Circle in the Square, the audience can almost smell the mix of dirt and desperation. "
Read more

"Judged as a showcase, 'American Buffalo' works beautifully. Rockwell has exactly the right tools to crack the Mamet safe. His half-whine, half-growl voice sings in what Todd London evocatively called the writer’s “fricative riffs” — unsurprisingly, given how well he’s suited to other writers of masculine lyric like Martin McDonagh. Fishburne, judging his rhythms to the nanosecond, grips the play and captains it, and it’s lucky that the close quarters of Circle in the Square allow you to see the details of his casual command. Criss, too, does fine work as the play’s slow-minded straight man, though he finds fewer details in his character than the other two men."
Read more

"David Mamet’s 'American Buffalo' is now on Broadway, buttressed by a starry cast. Laurence Fishburne, Sam Rockwell and Darren Criss are sharp and lithe in this revival of the caustic 1975 play about three hustlers planning a heist. They stalk across Scott Pask’s ornate set as they hurl Mamet’s signature terse prose at one another. Their speech moves rhythmically — a sonorous medley. They maneuver their bodies with precision and intention. This critic stared, entranced by their dance."
Read more

"Two questions hang over the characters of 'American Buffalo,' David Mamet's iconic 1975 play now in its third Broadway revival. First: Am I being ripped off? Second: Am I ripping off other people enough? Though the novelty of the playwright's trademark fast-paced, profanity-laced dialogue has worn off a bit amid the passing decades and sprawling imitators, these concerns feel as relevant to contemporary American life as ever."
Read more

"The play jolts alive when Rockwell enters, and the Oscar-winner is practically compelling enough to buoy this staging. He has an able scene partner in Fishburne, who brings a stolidity and authority to the store owner Don, a gravity that anchors the second act as Teach flails and decompensates."
Read more

"Mr. Mamet does not write tragedy—his characters are poor pipsqueaks compared to the doomed but majestic figures of the Greeks. 'American Buffalo' ends with a whimpering note of surprising, and touching, grace. For all their fecklessness and desperation, these men intuitively know that their only respite from a world they cannot compete in is the small comfort they can take in each other’s unspoken affection."
Read more