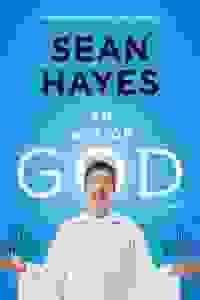 An Act of God (Sean Hayes) NYC Reviews and Tickets

In 'An Act of God,' the Almighty ('Will & Grace' star Sean Hayes) and His devoted angels answer some of the deepest questions that have plagued mankind since Creation.

The King of the Universe takes on His greatest challenge: Broadway. God—in the form of Sean Hayes—has finally arrived to set the record straight…and He's not holding back! Based on the book 'The Last Testament: A Memoir by God,' this 90-minute comedy was written by David Javerbaum, former head writer of 'The Daily Show,' and directed by Tony winner Joe Mantello. The show was previously mounted on Broadway in summer 2015 with Jim Parsons as God.

See it if You're a fan of topical humor especially if you're a Sean Hayes fan. He is TERRIFIC! Not just for liberals, I think it's fair to Christians.

Don't see it if You can't see that the bible is open to interpretation. If you're offended by views that may differ from yours, this is not for you.

Don't see it if You can't get a good discount.

Don't see it if you're too sensitive to laugh at Judeo-Christian religion or you're hoping for biting criticism and a sharp skewering of Christianity.

67
Breezy and irreverent look at how people invoke god to justify their actions, but is it funny enough?

See it if you enjoy a cheeky redo of the 10 commandments by Daily Show writer; charming Hayes acting his a** off as God using Will & Grace shtick

See it if enjoy a one man show and are a fan of Hayes. The two angels have little to add but there are sme funny lines.

Don't see it if you a strict religious believer. Some lines may clash with your feelings It is a cabaret show at Broadway prices,

See it if Laughed all the way through. Hayes is such an engaging performer. And I loved what the script had to say. An uplifting final message.

Don't see it if If your politics runs toward the more conservative side, you probably won't like what the script has to say.

See it if You like to laugh and enjoy topical humor that is not cruel. You want to see Sean Hayes perform - he was great.

Don't see it if You think jokes about religion and Donald Trump are inappropriate. You take the bible literally and don't believe in evolution.

See it if you'd enjoy a tour de force by Sean Hayes. This is very nearly a one-man show, and he is up to the task.

Don't see it if a nearly one-man show w/God talking to you for 80 minutes straight sounds like it has the potential to drag a bit for you; it may.

"A gut-busting-funny riff on the never-ending folly of mankind’s attempts to fathom God’s wishes…Mr. Javerbaum’s wit, one is tempted to say, is almost as infinite as God’s wisdom. There’s a good gag a minute, maybe more, in this 90-minute show. And in Mr. Hayes, God has a delightful infinite-wisdom delivery system…'An Act of God,' could be fancifully viewed as one of God’s better-realized creations. It’s an hour and a half of comedy heaven, and I’d gladly watch it annually."
Read more

"I could say that the return engagement of 'An Act of God,' now with Sean Hayes, is a revelation, a miraculous epiphany or similar 'religious' experience. Truth to tell, I was already a believer. I thoroughly enjoyed David Javerbaum’s theological satire last summer when it starred Jim Parsons, and I could watch Hayes’s bratty-campy shtick all night…The script is packed with verbal wit and high-information comedy…But it also finds room for genuine notes of regret."
Read more

"When Parsons played the role, his charm pulled the audience through these dark and thrilling passages. Hayes isn’t charming; rather, he’s 'charming.' His stage presentation involves multiple reflections of insincerity. The funny parts are slightly less funny as a result...On the other hand, the dark parts are more despairing, the shell of shtick providing no defense now...The show barely recovers its balance in time for God’s big number...But maybe that’s what He, or Javerbaum, wanted."
Read more

"Was it really necessary to bring the well-intended but underwhelming comedic monologue 'An Act of God' back to Broadway with Sean Hayes?...Even at just 90 minutes, 'An Act of God' is long-winded and full of unoriginal jabs at easy targets, but it is cute and occasionally witty...Hayes has terrific stage presence and makes for a giddy, loosened-up and irreverent host. 'An Act of God' may be slight, but it more than suits Hayes’ abilities as a stand-up comic."
Read more

"Sadly, it's still just mildly amusing…Hayes brings an extra touch of frivolity to a play that really calls for it. The whole event feels like a Chelsea cocktail party, with God as our vain and capricious host. That's a role that Hayes mastered on 'Will & Grace' and he proves that he's still got it here…Those looking for a boundary-pushing night of comedy may be disappointed to find a parade of stale quips and feel-good morals tailored for the Broadway audience."
Read more

"David Javerbaum's cute and charming comedy…You'd be hard-pressed to find anything blasphemous or edgy in this breezy 90-minute riff that depicts its central character as a left-leaning social commentator…Under Joe Mantello's direction, this is an adorably smarmy God…There isn't a lot to chew on, but nevertheless 'An Act of God' is a tasty and sweet stick of bubble gum, full of good laughs and silly summer fun."
Read more

"As an act, it is what it is, and you're either going to like it or not; when it gets into Play territory, it's more desperate...Hayes is a delightful, impish comic actor, who can simultaneously appear weighty and not actually be so, traits that are just right for the playful Deity...As good as Hayes is with the comedy, he has yet to lock down the (few) serious moments...If Hayes's performance, like 'An Act of God' itself, is hardly to be worshiped, they're both effective on its own terms."
Read more

"It's still basically an extended standup solo dressed up as a full-fledged play with spectacular stagecraft…No matter who's cast as God, Javerbaum's riff on civilization's most famous rule book is funny and clever, but hardly so much so that I was overjoyed at the prospect at seeing it again…Hayes knows how to charm the audience…His God is more physical and shtickier, though, to be fair, he doesn't overdo this."
Read more