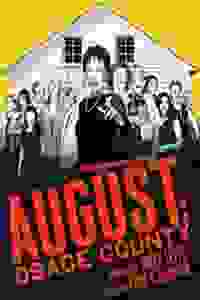 This black comedy about a family coping with loss transferred onto Broadway from the Steppenwolf Theatre in Chicago, where it proceeded to win five Tony Awards as well as a Pulitzer Prize.

‘August: Osage County’ tells the dark, hilarious and deeply touching story of the strong-willed women of the Weston family, whose lives have diverged until a family crisis brings them back to the Midwest house they grew up in, and to the dysfunctional woman who raised them.

Don't see it if you can't stand tension and alcoholism.

See it if you love a play that finds the monster in every closet. Less would have been more. Tennessee Wms knew when to stop; Letts doesn't.

Don't see it if It's worth seeing if you like family dramedies. Eventually, the relentless additions of horrors were tedious. What's the point of the play? Read more

See it if You love family dramas and want to see one of the most epic ever written.

Don't see it if You can't sit still for three hours, no matter how good the play.

See it if You love fantastic acting in shows about troubled families. You will remember the beautiful amazing set which really adds to the experience

Don't see it if You don't enjoy plays about squabbling, troubled families

See it if This is one of a handful of plays that I score a perfect 3. Any professional travel show that does this you will love

Don't see it if if a community theater tries to do it.

See it if Absorbing. The cast was terrific. The writing was wonderful. The time flew by.

Don't see it if It was quite long for a modern play, but I didn't notice or mind.

See it if you love the movie

Don't see it if you want a better show

See it if enjoy plays about dysfunctional families that are well acted, well written and have intense dialogue/story lines.

Don't see it if you are looking for a fun easy comedy.