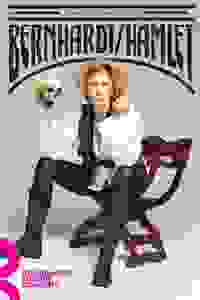 Mark Twain wrote: “There are five kinds of actresses: bad actresses, fair actresses, good actresses, great actresses. And then there is Sarah Bernhardt.” In 1899, the international stage celebrity sets out to tackle her most ambitious role yet: Hamlet.

See it if You want to see one of the greats...Janet McTeer...just own the stage in this smart, funny well written show.

Don't see it if You’re looking for fluff. There are a lot of laughs here but come on...it’s Hamlet...there’s a butt load of dialogue too.

See it if Partners 90% & my 80%. So relevant today.Great acting by Janet McTear and the 3 leading men. One should read the program notes if ...

Don't see it if at the perf. we attended, Act 1 one had a hearing aid malfunction Staff reacted quickly to solve it. Some events needed more info 2 1/2 hrs

See it if you're fan of McTeer, curious about Bernhardt & Rostand, learn about creation of Cyrano, as well as Sarah being first woman to play Hamlet

Don't see it if Don't like backstage plays or scenes from classics performed in the midst of the play, not a fan of McTeer, expect to see a strict biography

See it if Eschewing ingenue roles, Bernhardt must play Hamlet despite obstacles. McAteer commandingly matches Bernhardt's and The Bard's passions.

See it if Sarah Bernhardt wanting to do Hamlet her way she is a strong/beautiful woman. It takes place backstage of the theater.

Don't see it if If you want her life, or singing.

Also Problem was during this time people could not see women playing men. Sarah Bernhardt was a great actress. That is one reason I want, but this show does not go into her life. Its about the play Hamlet she wants to do.... Read more Read less

See it if you like seeing strong female characters, or enjoy incredible acting (the entire cast is wonderful) and vibrant sets and costumes.

Don't see it if you’re intimidated by a powerful, fiercely confident woman.

See it if To see Janet McTeer. Set and costumes were excellent. McTeer looked great at Hamlet. Other than that....

Don't see it if ...I found it hard to focus and hard to stay awake. Janet McTeer is of course a great actress but play seemed more like a theater exercise.

Also Maybe if I were more into Shakespeare I would have appreciated this more. However, I certainly know Hamlet well enough. I would have preferred to see McTeer play Hamlet as written, rather than all the discussion about whether she should or could.... Read more Read less

See it if you are a fan of Janet McTeer and like the sound of her voice. You will hear plenty of it.

Don't see it if you wish to know why Bernhardt played Hamlet and how she played it. There are many distractions to the main plot.

Also McTeer talks a lot and very quickly. I could never become involved with this play and I usually like this type of play. I was really interested in gaining some insights into Bernhardt's character but I only kept hearing McTeer talk and talk.... Read more Read less

See it if you want to see an award winning performance by McTeer and notable performances by all - Dylan Baker is especially terrific; lots of laughs.

Don't see it if you are not interested in either Sarah Bernhardt or Hamlet; you don't like plays about strong females; the second act meanders off course.

Also I loved this play & the performances, finding myself completely absorbed throughout. However, I found there to be a disconnect between the first and second acts. Second act brings in new story lines with little time to develop, while waiting for the climax of Bernhardt performing Hamlet. Instead, it ends with a first performance of Cyrano, written by her friend & lover.... Read more Read less

See it if You want to see McTeer’s stellar performance which is sure to get her a Tony nom ! You love contemporary plays based on historical figures.

Don't see it if You have no interest in the career and life of Sarah Bernhardt and are not a fan of Shakespearean drama.

See it if You are a big fan of Janet McTeer - who is always brilliant & are caught in the resurgence of the feminist movement. Great supporting cast.

Don't see it if You like fast moving plays. Tired of political speechifying.

Also The cast is awesome. Janet McTeer is, of course, a perfect Sarah Bernhardt. Dylan Baker is, as usual, excellent, always. He can fit in any situation.
I loved Jason Butler Harner as Bernhardt's married lover for his harried portrayal of the confused playwright who will do anything to please the star, even sacrifice his own morals.
The rest of the cast is equally as amazing! How can anyone not live in NYC? This is a perfect beginning to Roundabout's new season. The play slows down at times, but it is still in previews.

See it if You want to see GREAT actors in a mediocre play. Great staging and fun moments.

Don't see it if You want to see a play that doesn't center around one woman whining they entire time. The greatest moments didn't have her in it.

See it if you are a fan of Janet McTeer or if you want to see a lavish production of a new play for Broadway.

Don't see it if are not interested in theater history or Shakespeare or if you like a tightly focused plot.

See it if you love brilliant acting.Play is well written, well designed, & well directed, but it's the acting that makes it a must see.Mcteer rocks.

Don't see it if you want light and frothy.I loved the gender bending, the feminist perspective,the brilliant acting, the great set, the superb direction.

See it if you're intrigued by a before her time feminist who marched to her own beat.

Don't see it if you're looking for historical accuracy or you're easily bored. It's long and doesn't always keep one's attention.

See it if McTeer is excellent. The play is decent but difficult at times to become absorbed. Best seen when familiar with Hamlet.

Don't see it if You are unfamiliar with Hamlet or are uninterested in a semi history lesson.

See it if a play about actress Sarah Bernhardt playing Hamlet in 1899, amid personal ambition, affairs, & human fears that impede her focus, appeals.

Don't see it if expecting a bio-play about Sarah Bernhardt or a full production of Hamlet. This is an intelligent work about creativity and creating.

Also At over 6’ tall, Janet McTeer commands the stage, alright—but even if she was the 5’3” Sarah Bernhardt she plays, McTeer’s electrifying presence of melodramatic flair, humor, snappiness akin to that of a 1940s-starlet, and emotional sensitivity and revelation would still demand to be seen and absorbed as if a kind of vital magic. Part of the spell includes the gorgeous, imaginative set design. It’s a rotating visual feast, thanks to the talented set-designer Beowulf Boritt. I also had the pleasure of attending a preshow talk and postshow talkback with some castmates, including stellar Jason Butler Harner (an exceptional Reverend Parris in Broadway’s 2016’s The Crucible and Edmond Rostand here); as well as Dylan Baker (finely playing actor Constant Coquelin/Hamlet’s ghost). These opportunities always heighten my appreciation for productions (and Roundabout’s in general). Everything about Bernhardt/Hamlet speaks to the artistic, the feminine, and the human desires—do not miss this show!... Read more Read less

See it if Society can't handle women taking on powerful roles, even if it's just a play. Janet McTeer's wonderful.

Don't see it if Intellectual theater/actor talk goes over your head. Raises sexist sentiments that women should be seen, not heard, but offers no resolution

Also Ticket from online rush via TodayTix for $36.50. Seat was second row of the mezzanine.... Read more Read less

Don't see it if only like fluff, then this is not for you.

See it if You want see a clever play about feminism, acting, Shakespeare, and Sarah Bernhardt all in one. Janet McTeer is excellent.

Don't see it if You don’t have an attention span as you would miss the beauty of Theresa Rebeck’s language.

See it if you are fans of Janet McTeer and Dylan Baker.

Don't see it if you are intimidated seeing a woman play the title character of Hamlet.

See it if Unique play focusing on Sarah Bernhardt, her relationships,and desire to play Hamlet. Janet McTeer is terrific. Baker and Harner excel.

Don't see it if Subject matter is not of interest to you.

See it if You are interested in 19th Century actors. You like thinking about Hamlet from the actor's perspective.

Don't see it if You don't like historical dramas that probably aren't what really happened.

See it if You like Roundabout's style of over staged historic theater. You are interested in the subject, don't want to think to hard.

Don't see it if Unfortunately, play was way overacted, continuously, it was exhausting. McTeer's performance was so over the top, and so surface.

"Rebeck’s new play is so clever it uplifts, so timely it hurts...As Bernhardt locates the heart of Hamlet, Ms. McTeer the comedian becomes a riveting Shakespearean...But in the second act, after the big decision, the play loses some of its internal logic...'Bernhardt/Hamlet,' directed with wit an...
read more
Get Alerts Alerts On Alerts Off
“What ‘Bernhardt/Hamlet’ perversely refuses to give us is a coherent sense of Bernhardt’s performance in the role...Perhaps Rebeck is afraid that Bernhardt’s take on Hamlet would look dated or worse to a modern audience...While it is sometimes ungainly, the play is amusing on its own inside-theat...
read more
Get Alerts Alerts On Alerts Off
“'Bernhardt/Hamlet’ falls into the gaping trap of the bio-play. Full of period frills and actorly flourishes, it fails to convey either astonishing mythos or full, authentic humanity. Instead, it fills its protagonist’s mouth with passé sentiments, ideas whose risqué gloss has faded, packaged as ...
read more
Get Alerts Alerts On Alerts Off
“Despite many tantalizing elements and historical material ripe for exploration from a contemporary feminist perspective, Rebeck’s 'Bernhardt/Hamlet' doesn’t add up to a play. At least not a satisfying one...Rebeck is definitely stronger on dialogue than structure, but Von Stuelpnagel does what h...
read more
Get Alerts Alerts On Alerts Off 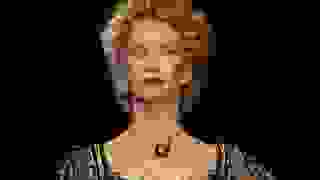 Never mind that Sarah Bernhardt — the towering actress of her day — was scarcely more than 5 feet tall. Janet McTeer stands nearly 6-feet-1, but that... 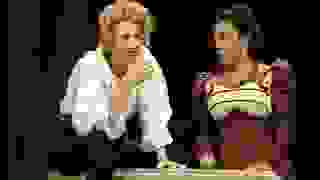 This Broadway Season, the Play’s Really the Thing

In a turnabout no one expected, New York’s most prominent stages are rich with drama, most of it new and most of it American. 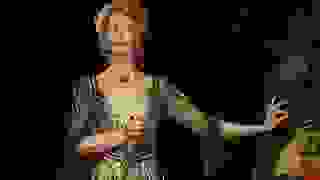 Janet McTeer on “Bernhardt/Hamlet.” Julie Taymor on her career & the Woodstock Film Festival. Charlie Herman on “Charlie For The Culture.” 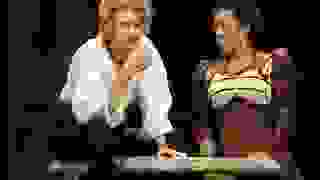 ‘Bernhardt/Hamlet’ asks if ‘we can accept a woman’s tragedy in the same way as a man’s tragedy.’ 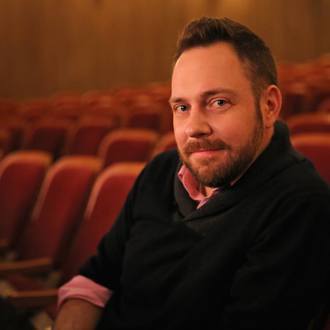 Moritz von Stuelpnagel
Director
Get Alerts Alerts On Alerts Off 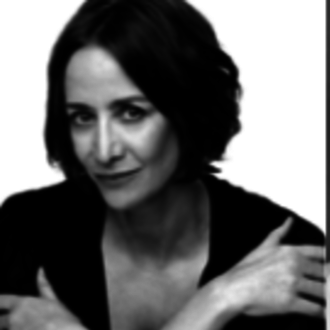 Janet McTeer
Sarah Bernhardt
Get Alerts Alerts On Alerts Off 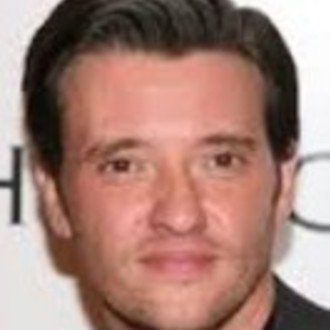 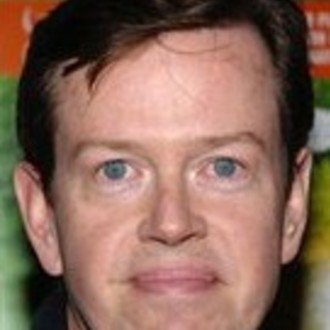 Dylan Baker
Constant Coquelin
Get Alerts Alerts On Alerts Off 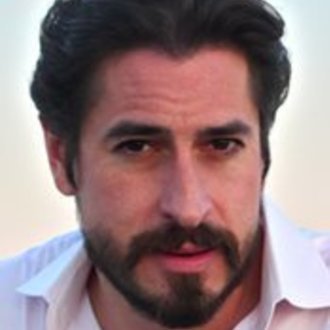 Matthew Saldivar
Alphonse Mucha
Get Alerts Alerts On Alerts Off