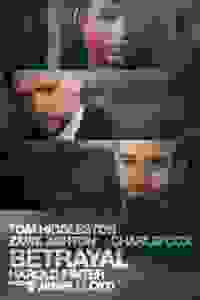 See it if you love Pinter revivals. It's stylishly barebones. Belongs in a sm setting. Acting is fine. It's slow/long. Horrible story abt selfish peo.

Don't see it if you don't care abt spoiled rich people. No one is likable. Love seems to only be lust. Action drags!Cut line abt "itch" to "bash" wife. Ugh!

See it if you enjoy well-written plays where every word is important and the actors deliver every syllable and expression perfectly in great staging.

See it if you want to see good actors working with a great script. Subtle and thrilling moments.

Don't see it if you don't like thinking while you watch a play.

See it if u want to see an elegant, brooding, sparsely-staged, expertly-acted, emotionally complex Pinter drama about truth & deception & infidelity.

Don't see it if u prefer ur love-triangle dramas full of mushy sentiment & histrionics (or superhero excessiveness) vs Pinteresque stiff-upper-lip stoicism.

See it if fan of Pinter and this play, have never seen this play before, fan of Hiddleston and Cox, dazzling direction, stunning performances

Don't see it if not a fan of Pinter or this play, upset by mild audience adoration of stars, uncomfortable with adultery, secrets & plot told in reverse

87
Beautifully acted play about the insidious nature of extramarital affairs; even not top shelf pinter is better than most plays on/off broadway

Don't see it if good but not Pinter's best; not dramatic, essentially displays class of arts-related people who use adultery to relieve their boredom Read more

See it if your a fan of this cast, including Tom Hiddleston, or you like dramas about complicated relationships.

Don't see it if you need a pick-me-up or like something quickly paced and with lots of action. This is a slow, quiet show with minimal movement.

3/5 Stars "Pinter's bone-dry, stiff-lipped tale of infidelity relies upon the audience's faith: It effectively asks that we take its word that these characters are interesting, and invest in them accordingly. But what if we don't? What if these three people...what if they merely bore us?"
Read more

"Pinter Without Pauses: The latest Broadway production of the play is drawing sellout crowds thanks to its star power—but not because of any dramatic excitement."
Read more

"Stylish, earnest, but off-the-mark... Director Jamie Lloyd and the cast decided to drag Pinter's subtext out of the shadows and plop it center stage...It's the fanciest acting class in the world, getting Pinter wrong."
Read more