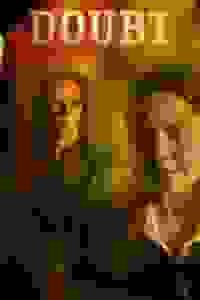 John Patrick Shanley’s tale of a power struggle in a school won the Pulitzer Prize and Tony award for Best Play in 2005.

Set in the Bronx in 1964 at a parochial school, Father Flynn the beloved priest finds himself at odds with Sister Aloysiu, when she finds out he’s been meeting with a student one-on-one. Sister Aloysiu, who already harbors a mistrust of most people in the school, begins to suspect Father Flynn of having sinister motives.

See it if riveting writing and performances. Story that grips you from the start. Subtle and deep. Clever sets.

Don't see it if you can't live in doubt. You need to know things for sure.

See it if You want to see one of the finest plays of recent years. Even if you saw the movie, the play is worth seeing.

Don't see it if You're incredibly religious and do not want to hear a story that might impact your faith.

Don't see it if You are looking for a big fancy Broadway production. This play is very black box style

See it if Cherry Jones is outstanding. Story raises difficult moral questions, but in the end, the show leaves us in doubt about what we think we know

Don't see it if You have trouble seeing authority challenged, have been in denial about sexual abuse and the Church, you want happy endings.

See it if You love a complex engaging story

See it if The way theatre is supposed to be. Gripping, intensely acted, meaningful.

Don't see it if You are looking for a light comedy or are sensitive to a discussion of religious topics and childhood assaults.

See it if You can appreciate powerful plays that are extremely well acted. Cherry Jones is incredible.

Don't see it if You don't enjoy thinking about what you see and are interested in light entertainment.

See it if You enjoy literate, intense performances and subject matter.

Don't see it if You only want singing and dancing, or don't like to be challenged when you see a show.