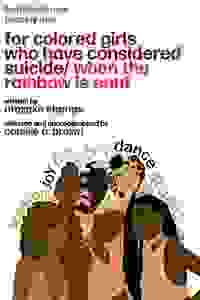 View in admin
For Colored Girls Who Have Considered Suicide / When the Rainbow Is Enuf (Broadway)
NYC: Midtown W
80
Score it Scored!

A fearlessly new, fiercely now reinvention of Ntozake Shange’s iconic choreopoem, 'for colored girls who have considered suicide / when the rainbow is enuf.' Seven Black women share their stories and find strength in each other’s humor and passion through a fusion of poetry, dance, music, and song that explodes off the stage and resonates with all.

Called “A landmark of American theater” by The New York Times, the masterwork has blazed a trail for generations of Black-femme artists. Directed and choreographed by Camille A. Brown, a double Tony nominee for this production.

The production was also nominated for a Tony for Best Revival a Play. Kenita R. Miller, who performed as Lady in Red while nine months pregnant, was nominated for Best Performance by a Featured Actress in a Play.

See it if You enjoy dance & spoken word…both poetry and stories, mostly self reflective. A troupe of 7 women fill the stage with exquisite movement.

Don't see it if You want a plot or any linear storyline at all. They have a shared life perspective but each story is individual. Read more

Don't see it if you seek a linear play as this is a series of vignettes in 90 minutes on experiences of 7 Black women where they overcome various struggles.

78
Makes vital legendary 1970s feminist play; but it remains more a performance piece for a series of poems than an integrated dramatic vehicle

Don't see it if fragmented w 7 actresses, no single character to identify with; lacks narrative drive as each tells her individual story Read more

See it if you like a show with great relevance and is told with intensity by talented actresses, supported by great writing and choreography.

Don't see it if you don't like talk of violence against women or you like a happy type of show. These women discuss their lives and it ain't pretty. Read more

See it if Show about girl empowering, with dancing and powerful stories. Funny at time.

Don't see it if If you are looking for a flashy show.

See it if you’s enjoy a play that is a collection of scenes and character experiences rather than a straightforward narrative. Kenita R. Miller is A+.

Don't see it if you only like shows with a linear narrative.

See it if interested in a non-traditional show that expresses itself often through poetry & dance. At times joyous, at times devastating. Great cast.

Don't see it if you want a linear plot & a through storyline. At times a little slow. Read more

See it if American Classic that all should see.

Don't see it if If the struggles of African Americans make you uncomfortable then skip!

"“For Colored Girls” is an assertion of the right to own all of the feelings and all of the colors of experience. It pulses and pulses with life, singing a Black girl’s song. And in Brown’s sublime and supple channeling, we hear Shange with exquisite clarity."
Read more

"This version of 'for colored girls' truly does feel like a choreopoem, Shange’s term for her amalgamation of words, motion and music. (The percussive original score is by Martha Redbone and Aaron Whitby). The seven women on stage are barefoot, and their movement—which draws on African-American traditions including juba, stepping and social dance—feels organic, natural and triumphant."
Read more

"Not to get too mystical about it, but this impeccably performed, exquisitely choreographed revival manages the same for many of us out there in the dark. Dance, said Shange, allowed her to understand the planet the way “atomic particles experience space.” If that’s so, then atomic particles must love each other wildly. They must always be so grateful to see each other, whenever gravity — or a revival — draws them back into one another’s arms."
Read more

"The magic of Brown’s version of 'for colored girls' is that it fashions the choreopoem as an invitation. Even Lady in Red’s devastating monologue about escaping an abusive relationship blurs the boundary between audience and actor; with the background dark and a single spotlight illuminating the performer, it feels like the story is being told to you and you alone."
Read more

"Throughout the production, themes of visibility filter through every enunciated breath and rhythmic melody. With the ladies’ natural crowns beautified with box braids, locs and shaped afros, the impressive ensemble of seven performers seamlessly works in tandem to create a kaleidoscope of dazzling Black femininity, making it impossible to look away. Every woman here has a story, a complication or an awakening deserving of an ear. Or several."
Read more

"The vibrant new revival, directed and choreographed by Camille A. Brown, recaptures the show’s pioneering, even radical spirit; it remains a show that stands apart, even as explorations of black experience have proliferated in the theater in the years since."
Read more

"Shange’s fantasia of poetry, dance and stories of confession, defiance, sisterhood and, above all, perseverance, holds a power that’s not been weakened either by decades or the loss of a once startling newness."
Read more

"The play comes across, unfortunately, as an antiquated time machine that’s at odds with the current conversation. Being a glimpse into a specific, different era would be OK — plenty of revivals fit that bill — but “for colored girls” seems awfully intent on speaking forcefully to the present moment. A strong connection to today, however, is nowhere to be found."
Read more