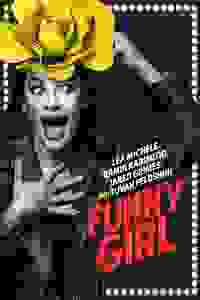 Everyone told Fanny Brice that she'd never be a star, but then something funny happened. The beloved, bittersweet romantic comedy 'Funny Girl' is back on Broadway for the first time since its premiere 58 years.

Featuring some of the most iconic songs in theater history including “Don’t Rain On My Parade,” “I’m the Greatest Star,” and “People,' and starring Lea Michele, Tony nominee Ramin Karimloo, and Tovah Feldshuh. Michael Mayer directs the bold new production with a revised book by Harvey Fierstein.

Jared Grimes was nominated for a Tony Award for his performance as the tap dancing Eddie Ryan.

See it if Beanie can't cut the lead role. Movie was much better.

Don't see it if If you enjoy the movie with Streisand you will think this is not on par.

Don't see it if you have high expectations - it feels a bit flat: the orchestra is okay and Beanie Feldstein can hold a long note, but her voice is not... Read more

See it if you've never seen a live production of this show, enjoy old fashioned musicals, you're a fan of any of the principals, curious about changes

Don't see it if you are expecting a Streisand version, don't like limited-style staging, want extraordinary singing by lead, an odd choice for Fanny

Don't see it if meh old fashioned musical that does spectacle well, but not plot or message; weak 2nd act Read more

See it if you love a great revival of a wonderful show. Great staging, singing, acting and dance numbers. Cast is fantastic.

See it if you enjoy classic Broadway musical comedies with a red curtain (albeit it’s actually a scrim) and overture. Beanie is wonderful as Fanny.

Don't see it if you’re closed minded and refuse to acknowledge that a role could be played by more than one person. You’ll never be satisfied.

See it if you love the score and want to relive some memories.Lea Michele&Tovah Feldshuh are PERFECT in the roles.Finally the revival we needed.

Don't see it if you don't like old fashioned musicals.This is a classic & is well worth your time.

See it if you like this material, I guess. Jared Grimes is terrific but his part is too small. Beanie is appealing, but the book just isn’t good.

Don't see it if you think a musical needn’t be revived if the main reason people liked it was one person’s performance in an otherwise bland affair.

"Over the years, many revivals have been attempted and defeated because the thing a revival is trying to revive is not to be found in the property itself. It’s in the personality of the necessary star: someone not nice but inevitable, not diligent but explosive, not well-rounded but weird. They don’t grow them that way much, anymore, nor write new material for them."
Read more

"There’s a reason 'Funny Girl' hasn’t been revived since its original run in the early 1960s: Despite several memorable songs (with first-rate tunes by Jule Styne and second-rate lyrics by Bob Merrill), there’s not much to the story ... Isobel Lennart’s book has been rewritten for this production by Harvey Fierstein, but it still feels episodic and superficial. "
Read more

"Some of Feldstein’s assets do make the trip over from film: She’s winningly fresh; she gives great “bumble;” she has beautiful eyes the size of hubcaps, which roll and twinkle and flirt. ... But in song after song, Feldstein’s voice lets her down. Piercing and unpleasant when it gets any higher than her chest, fading and pitchy when it descends even a few steps, it’s simply not a sound you expect to hear on Broadway."
Read more

"Feldstein gives a spirited, highly enjoyable performance, and her freshness drew squeals of appreciation from what seemed like a large contingent of very vocal young female fans on a recent press night. But she never quite makes the material soar, and this is a rickety vehicle that needs a supernova to put gas in its tank."
Read more

"Fierstein's version of the story spends so little time building dramatic tension in its central relationship, or on the stakes of Fanny's brash feints and mistakes, that it often feels like a friction-free CliffNotes of the original; all the razzle-dazzle, none of the pesky realities. More than that, it's hard to escape the feeling that Feldstein, for all her fourth-wall winks and bright enthusiasm, is fundamentally miscast."
Read more

"The problem with this uninspired revival of 'Funny Girl' — which opened at the August Wilson Theatre on Sunday, marking the show’s Broadway return after nearly 60 years — is not simply the singular ghost of she who shall not be named. (Alright: It’s Barbra Steisand.) Rather, the issue here is the production’s inability to live up to its star-making potential that would have made us once again forgive the simplistic, sentimental and sanitized original book credited to Isobel Lennart."
Read more

"Ms. Feldstein deserves applause and even our affection for setting forth on the task. If she doesn’t quite scale the heights that the role requires, that’s more a reflection of the perilous altitude of the peak than the potential of her talents."
Read more

"She’s not the reincarnation of Barbra, and, wisely, no pale imitation, either (close but no cigar). She can’t sing like Streisand, although her voice is beautiful and clarion-clear, and musically, it hits the top of the second balcony without even trying. I think it’s safe to say she lacks both the same comic timing and the coldly calculated genius. But she does have one thing her legendary predecessor in the role did not have—a sweet, warm truthfulness that makes her more accessible. She’s familiar, comfortable in her skin, like an old friend."
Read more