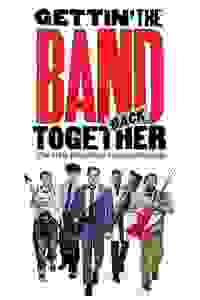 View in admin
Gettin’ the Band Back Together (NYC)
NYC: Midtown W
73
Score it Scored!

Gettin’ the Band Back Together (NYC) NYC Reviews and Tickets

The Tony Award-winning director of 'Urinetown' returns to Broadway with this new musical comedy, the story of a laid off 40-year-old who finds that the only hope for his future lies in revisiting his rock and roll past.

Mitch Papadopolous always dreamed about being the next Bon Jovi, but he chose security over stardom and left those daydreams behind for a day job. For a while he thought he had everything – the high paying job, the high-rise apartment – until his 40th birthday when he got handed a pink slip and had to move back in with his Mom in Sayreville, New Jersey.

And when his high school arch nemesis (with a 20-year-old grudge and a tangerine spray tan) threatens to foreclose on their house, this big-shot banker must save his small-town home the only way he can…by winning The Battle of the Bands.

So he dusts off his guitar, gathers his old gang (the math teacher who isn’t good at math, the Irish cop who dreams about being on Broadway, the dermatologist who can’t get a date, and a 16-year-old Jewish rapper who makes Vanilla Ice look cool), and sets out to win the battle…and maybe even win back the high school sweetheart he left behind…proving it’s never too late to give your dreams one last shot.

See it if You liked Rock If Ages (it seemed to push all the same buttons for me). Pure silly FUN! Lots of great talent on stage and all gave 100%!

Don't see it if You’re expecting great art. This is the equivalent of sitcom television-it’s light, predictable and cliched but it’s funny and I laughed!

See it if This is a good regional production, not a broadway one. It is dated, predictable . It reminded me of rock of ages in the beginning.

Don't see it if While it has good direction, this show gets lost.

See it if you want an old-fashioned story-type show with enthusiastic cast, a few production numbers & reassuring ending, nothing offensive

See it if Fun Show for a night out, with music and alot of laughs. Man moves back home with his mom after losing his job and that the start.

Don't see it if No deep story, fun story. Man goes home and think about choices, and selling out for the easy way not trying to follow his dreams.

See it if You’re open to having a good time at a show that’s just there to delight you, and not be anything groundbreaking or profound.

Don't see it if You’re going to be horribly critical about how average, crowd-pleasing shows make it to Broadway. Just go and have fun!

Don't see it if Shallow characters & plot invoke comparisons to inane "School of Rock" and "Full Monty." Sayreville and the letter "G" should sue.

See it if You enjoy some catchy songs and performers who give it their all. Lead actor, his mom & his long-lost girlfriend are highlights here.

Don't see it if Some cringeworthy lyrics, show moves extremely slowly, many lame jokes that fail to land. Way too long at 2 hours 35 minutes.

See it if you want to see an energetic cast with some talent give their all with material that is occasionally funny.

Don't see it if you expect something that is original or clever. The cast deserved better! Read more

"Empty-headed entertainment...Originality isn’t novelty, and the show is such a calculated rehash of a million tired tropes that it can best be described with Broadway math: 'School of Rock' plus 'The Fully Monty' divided by 'The Wedding Singer' — and multiplied by zero...Here the obviousness of the characters and the outcome of the plot give the songs almost nothing to do, and here I’m able to say that Mark Allen, who wrote the music and lyrics, is equal to the task."
Read more

"A community-theater vanity production that has somehow surfaced at a Broadway house, it is schlocky at every turn. In essence the show is a fusion of 'Rock of Ages,' minus the hit songs, with 'The Full Monty,' minus the sincerity, charm, and character development...Aspires to a knowing attitude toward its own silliness...But it’s not sharp enough to pull off the gambit; you can’t tell if it’s winking or just has something weird in its eye. Even the show’s best bits get pounded flat."
Read more

"'Gettin’ the Band Back Together' is marketing one of my least favorite kinds of fun: the sentimental myth of the 'do over'...Its writers seem to be laboring under the misconception that because something actually happened to you, it’s not a cliché. The play they’ve put together, from its plot to its sense of humor, feels like the theatrical equivalent of one of those movies that metastasizes out of a mis-chosen SNL sketch."
Read more

"Technically speaking the show isn't based on a pre-existing movie or literary property. But if there's one thing 'Gettin' the Band Back Together' isn't, it's original...To say that the humor is unsophisticated is an understatement...But some of the comic bits, both physical and verbal, are very amusing. You may find yourself laughing a lot, although you won't be proud of it afterwards...The score is strictly generic pop-rock but bouncy enough."
Read more

"Even if the route is obvious, 'Gettin’ the Band Back Together' is not a bad ride...While none of the musical’s songs are bound for a greatest hits compilation, they fit the upbeat, rocking vibe the show is going for. To keep with the musical parlance of the title, 'Gettin’ the Band Back Together' is like hearing an artist cover a favorite song — it’s not the first time you’ve heard it, and it might not be all that original, but you’ll be smiling and tapping your feet just the same."
Read more

"Although simplistic by design, the script is funny without being hilarious, grooving along mainly on its many goofy throwaway lines...Nunes delivers a cool performance and a killer musical turn, and runs away with the show...Cheap laughs? You bet, but even cheap laughs count; and let’s admit it—it feels so good to laugh real laughs on Broadway."
Read more

"What it’s doing on Broadway is hard to figure, but the members of the cast of 'Gettin’ the Band Back Together' are so amiable that it’s not too unpleasant—up to a point—to spend an evening watching them tell corny jokes and sing Mark Allen’s lame but innocuous songs...While I certainly don’t recommend that you spend your own money on 'Gettin’ the Band Back Together,' it won’t kill you should you be forced to see it on somebody else’s dime."
Read more

"Sweaty, janky garbage fire...The plot feels like a bottom-shelf Ben Stiller–Owen Wilson vehicle from 2006, one that ranks below 'Little Fockers' at that...Klaitz, wild-eyed and roly-poly, gets a tacky but enjoyable Meat Loaf-ish wailer...Such moments, if there were more, could have saved the show, especially with a cast this appealing and given John Rando’s bright, comic staging. But there’s the music. Such crummy music."
Read more