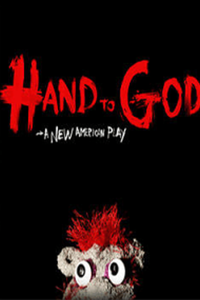 Fresh from a critically-acclaimed run Off-Broadway comes a lightning-paced comedy about a Texas town's Christian Puppet Ministry...and one of its shockingly foul-mouthed sock puppets.

This comedy is about shy, inquisitive student Jason, who finds an outlet for his burgeoning creativity at the Christian Puppet Ministry in the devoutly religious, relatively quiet small town of Cypress, Texas. That is until his hand puppet Tyrone — once soft-spoken — takes on a shocking and dangerously irreverent personality all its own. As Tyrone’s influence over Jason steadily grows, Hand to God explores the startlingly fragile nature of faith, morality, and the ties that bind us.

See it if brilliantly written and acted. Hysterically funny.

Don't see it if if you don't like profanity

See it if You enjoy dark comedies with adult themes and like to laugh.

Don't see it if You are religious and don't like social commentary on religious themes. Are turned off by foul language.

See it if you enjoy a wild, wacky premise. Boyer soars as the boy possessed by a demon puppet. Chaos reigns. A bit out of control in the 2nd half.

Don't see it if you dislike violence on stage. Highly engaging, but intellectually a bit light. Better at the tiny early venue than on Bway (I saw both). Read more

See it if you want to walk out. a Dud!

Don't see it if you want save money.

See it if you enjoy intelligent theater that enables you to think, you like being pleasantly astonished by excellent playwrighting, staging and acting

Don't see it if You are closed to new ways of thinking, you take your religion too seriously, puppets scare you, onstage suggestions of sex repels you

See it if You want to see a tremendous performance by the lead actor.

Don't see it if You think this is going to be a groundbreaking or laugh-till-you-drop comedy.

See it if you like puppetry and dark humor.

Don't see it if you're very "protective" of Christianity (i.e., aren't willing to make light of religion).

See it if you don't want to be the dummy who missed Steven Boyer's AMAZING performance. It's truly remarkable.

"In a Broadway season dominated by the usual fodder — Mr. Askins’s black comedy about the divided human soul stands out as a misfit both merry and scary, and very welcome...You can enjoy “Hand to God” merely as a festival of filthy hilarity..but as I watched the play this year, for the third time, I found myself peering more closely into its psychological depths, and finding in it a weird mirror of our unsettling times. "
Read more

"Praise be to the angels behind it:" Hand to God " has made it to Broadway. Some have wondered whether Robert Askins’s outrageous dark comedy—about a sweet Christian teen, Jason and his demonic puppet, Tyrone—would work as well in a larger venue as in its two hit Off Broadway runs. The answer is a resounding, full-throated yes. The freshest and funniest Broadway comedy in years, "Hand to God" is to plays as "The Book of Mormon" is to musicals: a welcome breath of foul air."
Read more

"Broadway’s unlikeliest new must-see play. I say “unlikeliest” in part because it’s the kind of intelligent, blood-dark comedy — disturbing as often as it is funny, vile as often as it is violent, and, to my mind, better for both..."Hand to God" is successfully disguising its larger concerns under the cloak of dirty puppet talk. I found this aspect of the play a bit belabored...But as the dark comedy more nearly approaches its darkness, the tale becomes more emotionally legible, and at times even heartbreaking."
Read more

"Director von Stuelpnagel and his terrific cast tackle this darkly funny material with a shrewd balance of heightened reality, warped sitcom and underlying pathos, landing all the jokes while never denying the genuine sorrow and anger driving both Jason and Margery to such erratic behavior. That said, the play delivers a steady stream of laughs, and one truly uproarious sight gag full of details that keep on giving."
Read more

"Robert Askins’ furiously funny comedy about adolescent rebellion against religious cant has made a smooth passage to Broadway. Moritz von Stuelpnagel hasn’t touched a hair on the head of his clever production and the original cast is still golden...Askins’ most impressive talent, though is his ability to make us laugh while juggling those big themes that make life so terrifying: death, depression, alcoholism, sexual guilt, emotional repression, religious hypocrisy and the eternal battle between your good puppet and your bad puppet."
Read more

"Nothing is more exciting than a new play that takes you by surprise, and Robert Askins’s “Hand to God,”, does so over and over again...Scratch the surface and you’ll find a dead-serious black comedy in which the disruptive power of lust is dramatized in a manner so outrageous as to recall the ruthlessly funny plays of Joe Orton...“Hand to God” isn’t perfect, but it’s staggeringly funny and promising without limit."
Read more

"A brainless barrage of trash, heresy, stupidity and nausea called "Hand to God" is the first time, in all my years on the aisle, that I have finally seen an entire stage filled with unmitigated crap. There is no plot, no narrative form, no theme...The hand puppet shrieks, screams, spits, vomits and fornicates profusely while the audience explodes with laughter so loud and raucous that it echoes from the Booth Theatre...With "Hand to God," the audience is a cause for serious concern."
Read more

"There are many reasons to celebrate the arrival on Broadway of Robert Askins’ "Hand To God". It wraps its seriousness in a veneer of XXX-rated irreverence. I don’t know which I want to do more: Sing Hallelujah — or wash its dirty little mouth out with soap. It’s probably no one’s idea of a Broadway show...song-free and purposely looking as though it was produced on a Cookie Monster-sale budget, "Hand To God" is a Book Of Revelations about what should be possible on Broadway."
Read more