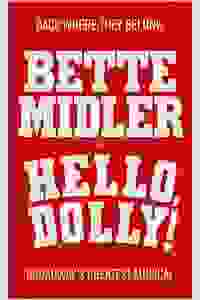 A meddlesome matchmaker brings together the young clerk of a wealthy Yonkers merchant and his assistant with a widowed milliner and her assistant, while making sure she gets to marry the merchant herself. Jerry Herman and Michael Stewart's musical collaboration spawned many classic songs, including "Put On Your Sunday Clothes," "Before the Parade Passes By," and the title tune.

See it if you want pure escapism. HD's world is pastel pretty. You'll laugh, sing along (in your head!), & enjoy great production values.

See it if You want to see about as near perfect production of this classic show as there may ever be. Bette as well as the entire cast are fantastic.

Don't see it if I can't imagine any reason anyone would not want to see this show. It's gorgeous!

See it if This a big show, big songs, characters and staging as well as direction. Fabulous music and creativity. Liked War Paint better, Lupone as

Don't see it if best actress, however, you will not be disappointed. Do not see if you don't like a big stage musical with the bravado and staging like this

Don't see it if Silly nonsensical story, cliched characters and plot, just the one memorable song (though the others were cute too)

See it if you love big musicals! Treat yourself to an evening delights. Bette Midler is marvelous and so is the rest of the cast.

Don't see it if you hate big musicals! This one is as big as it gets with a huge cast.

See it if you want a splashy, colorful, energetic, magnificently-staged, old-school musical that's all style & no substance; you're a Bette acolyte.

Don't see it if you want a show with heart (it's about a money-hungry woman hoodwinking a rich misogynist into marrying her!) or substance (pure frivolity!) Read more

See it if Donna Murphy sparkles in this crackerjack, cartoon pop-up revival of the classic Broadway musical with Herman's score still a charmer

Don't see it if Sure, it's a little dated & book-wise its clunky but perfect escapist antidote to the age of Trump. Hyde Pierce leads a superb ensemble

Don't see it if this is an unapologetic old-style vaudevillian musical where everything/storytelling, humor, dancing, etc. is big, brassy & un-ironic Read more

"Peters makes it clear that Dolly is talking about real hardships...She sings the Jerry Herman songs thrillingly, of course...I don’t mean that she isn’t funny; she is...The other new principals match the bright polish of the original cast, which has grown a bit zany with time...Ms. Peters goes along with all this, to a point. But sometimes I felt she would rather observe the parade than be in it. Personally, I’m a sucker for that: I think it gives this 'Dolly' a fascinating new valence."
Read more

“A blissful Broadway revival…The part of Dolly is exquisitely suited to Midler’s enormous warmth, savvy and drive. It’s hard to imagine a better match of actor and role: It is, in a word, perfection…‘Hello, Dolly!’ may be a vehicle for its star, but this revival treats it like a vintage Rolls-Royce. From the rousing overture on, everything about the production, directed with joyful aplomb by Jerry Zaks, gleams with old-fashioned charm…Jerry Herman’s exuberant score is a show-tune bonanza.”
Read more

"The characters address the audience from time to time, which gives Midler a chance to connect with us by drawing on who she really is, as well as whom she wants to portray...The role of Dolly isn’t necessarily tailor-made for Midler—she’s infinitely more complicated and funny and there isn’t a corny bone in her body—but she has remade the character in her own image: as a scrappy trickster with needs and vulnerabilities."
Read more

"The two-time Tony Award winning performer has brought a poignancy to the production that wasn't quite in evidence with her predecessor...Which is not to say that she falls short of the role's comedic demands. Her performance is less vivacious than Midler's, but no less hilarious...If Garber's more restrained performance is less gut-busting, it's also less of a caricature...Stemp is a revelation...Zaks' perfectly tooled staging hasn't lost a step, dancing or otherwise, since the show opened."
Read more

"So much of the charm of this production is in what hasn’t changed...Where Midler’s personality soared to the back of the balcony, Peters engages with the audience on a more intimate level, at times working the crowd like a comedian singling out a spectator...The marriage of actor and role here is so neat, you’d think Dolly made the match; Garber does stodgy, befuddled warmth better than anyone in the business...The other new cast members are strong across the board."
Read more

"This Dolly’s personal style is to twinkle and charm people into getting her way. She also has the acting chops to moisten eyeballs when she entreats her late husband to bless her renouncement of widowhood...A new addition to the cast, Charlie Stemp, seems a bit too broad in the comic role of Cornelius’s sidekick...As usually happens when a director and a choreographer keep a sharp eye on their baby, the overall production of this classic never looked better."
Read more

“Ms. Midler’s singing voice is in a desperate, sometimes shocking state of disrepair…As for the rest of the performance, Ms. Midler doesn’t even bother to act…She can’t dance and isn’t funny…David Hyde Pierce is all wrong as Horace…What’s more, he and Ms. Midler have no romantic chemistry at all, which makes the show even less dramatically plausible...Every supporting performance is a grotesque caricature…As for the musical numbers, they’re camped up to the hilt.”
Read more

"Murphy is absolutely wonderful as the meddling, multitasking matchmaker...Murphy’s Dolly is gabby, game and gleeful as she dispenses the pleasures of Jerry Herman’s songs and Michael Stewart’s lines...Jerry Zaks’ production is better. The dancing of Warren Carlyle’s choreography is sharper and funnier. The sound is more crisp, the ensemble more assured and the accompanying stars perfectly aligned."
Read more