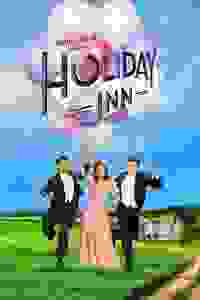 Jim leaves the bright lights of show business behind to settle down on his farmhouse in Connecticut, but life just isn’t the same without a bit of song and dance. Jim’s luck takes a spectacular turn when he meets Linda, a spirited schoolteacher with talent to spare. Together they turn the farmhouse into a fabulous inn with dazzling performances to celebrate each holiday, from Thanksgiving to the Fourth of July. But when Jim’s best friend Ted tries to lure Linda away to be his new dance partner in Hollywood, will Jim be able to salvage his latest chance at love? Featuring a host of iconic songs including "White Christmas," "Easter Parade," and "Blue Skies."

See it if you like a fun light night with some great dance numbers. The orchestra is grand. The story is predictable, sets and costume a yawn.

Don't see it if you want a big flashy old style musical. This could have (and should have) been one but it's just not. It's not bad but should've been more.

See it if You want great all time songs. Berlin at his best.

Don't see it if At two and a half hours long, some may think it's to long. If you like drama

See it if Felt just like the 1940s. Stellar dancing. Strong performances. Music was classic. Sitting front row center was a bonus! A fun show!

Don't see it if If you don't like that Irving Berlin feel or a corny, but very entertaining plot and dialogue.

Don't see it if Feels slow despite the rapid scene changes & dance numbers. Often dated but somehow in a good way. Turn the brain off & enjoy

See it if you like a good, old-fashioned musical with a happy ending. This is a crowd pleaser with great tunes, great dancing, and great acting.

Don't see it if you prefer something with edge, great substance, or a contemporary flare. Read more

See it if You want to immerse yourself in an old fashioned, perfectly executed, sweet Broadway musical. Audience seemed to love every minute of it.

Don't see it if You don't like musicals and/or dancing. If you want a night of serious drama at the theater this is not it. Read more

See it if you want to escape the world at large; you enjoy great staging, sets, singing, dancing and old fashioned musicals; male leads are wonderful.

Don't see it if you are looking for a play with deep meaning and a serious book; you don't enjoy musicals and smiling faces.

See it if you want to put your cares behind you with a lavish, old-fashioned, tuneful, corny entertainment.

Don't see it if are looking for something forward-looking or profound. Read more

"All of the performers are skilled singers and actors, filling in the generic contours of their characters with proficient professionalism...The interpolated songs are integrated into the plot smoothly enough, without lifting the show’s mild temperature...'Holiday Inn' wore out its welcome for me well before the inevitable reprise of 'White Christmas' that comes toward the close...It’s polished and pleasant. But a great gift to the theater season aborning it’s not."
Read more

"Bleu has a winning muscularity and grace in various tap and ballroom sequences. Pinkham generates some chemistry with Gayer. They duet sweetly on 'White Christmas,' one of the two dozen-odd Irving Berlin ditties jukeboxed into a jazzy-elegant score. And let’s hear it for the chorus—an adorable, charmingly diverse bunch. Sure, there’s more corn and cheese served in this earnest, sweater-vested affair than any nutritionist would approve, but what harm in a cup of early eggnog?"
Read more

"Holiday Inn' is less a 'New Irving Berlin Musical' than a new Irving Berlin medley. But that seems to have been the intention, using the cover of old-fashioned family entertainment to excuse the let’s-throw-it-all-on-the-stage aesthetic. The emphasis on brightness and speed is so extreme that the show too often feels paradoxically dim and tiresome. (The sets are flat, the lights are glare-y, and the costumes are garish.) Certainly the dialogue, which is mostly backfill, doesn’t help."
Read more

"So sweetly wholesome that you experience a sugar rush while watching it, the show is corny and predictable. But it will surely provide a happy diversion for stressed-out theatergoers during the holiday season...Pinkham and Gayer prove an appealing romantic duo, while Bleu displays his formidable singing and dancing chops in his underwritten role...There may be lulls in between, but this is a 'Holiday Inn' you'll want to check into."
Read more

"There’s virtually nothing new about 'Holiday Inn'...The characters are so stock they’re practically cardboard. And the 'plot' is pretty much just a clothesline on which to hang Berlin’s songs. Still, you’d have to be a total Grinch not to melt even a little during Berlin’s comforting-as-cocoa Christmas ballad. And who couldn’t succumb to the charms of the tap-happy 'Shaking the Blues Away'...That’s all it takes to get the audience immediately into the holiday spirit."
Read more

"Greenberg and Hodge have significantly rethought, reshaped and revitalized the script, giving the show more heart, a slightly modern sensibility and a joyful spirit. Engaging performances, dynamic dancing and a lively orchestra make it the feel-good show of the fall...The lead performers are smashing, especially Pinkham...Bleu is a spark plug of energy, and his hoofing in 'You’re Easy to Dance With' and 'Let’s Say It With Firecrackers' are two of the musical’s dance delights."
Read more

"It’s slick, synthetic and soulless, a musical full of robotic jokes and devoid of genuine romance. The uncharismatic leading men, Bryce Pinkham and Corbin Bleu, are to Crosby and Astaire what a Whopper is to a New York strip. The only noteworthy thing about 'Holiday Inn' is Megan Lawrence, who makes something extra-special out of the thankless part of the smart-ass second banana who doesn’t get the guy."
Read more

"An endorphin assault, inducing warm-bath pleasure like no other show since '42nd Street.' The dancing is spectacular, the singing sublime, the visuals are ingenious and, almost incidentally, there’s the cataract of Irving Berlin songs...Corbin Bleu is the discovery, tapping up a storm that recalls the young Sammy Davis Jr...Above all, Denis Jones deploys a smallish troupe of dazzling hoofers with a perfect mix of precision and abandon."
Read more