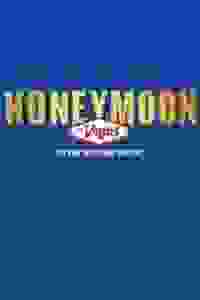 Tony Danza stars in a new musical comedy based on the 1992 film about a love triangle set amongst the glitz of Las Vegas.

The show tells the story of Jack, a Brooklynite with an extreme fear of marriage, who finally gets up the nerve to ask his girlfriend Betsy to marry him. But when smooth-talking gambler Tommy — looking for a second chance at love — falls head-over-heels for Betsy, Jack must go to extreme heights to win back the love of his life. A romantic romp from New York to Vegas to Hawaii about the crazy things we do for love.

See it if surprisingly good and entertaining. Classic looking production.

Don't see it if you don't like solid meat and potatoes Broadway.

See it if You like entertaining crowd pleasers, looking to have a light fun night at the theater.

Don't see it if You want a dramatic or heavy play that makes you think.

"Wake up and smell the mai tais, New York. Las Vegas has come calling on you. And it’s on such good behavior, you’d be a churl not to embrace it...This production is a real-live, old-fashioned, deeply satisfying Broadway musical in a way few new shows are anymore. It offers the perfect sunny holiday for frozen Eastern city dwellers."
Read more

"How to answer snobs who denounce Broadway as a cultural wasteland of gaudy lights, musical cheese and tacky titillation, a place where suckers flock to get fleeced? At least it’s not…Las Vegas? Well, the Great White Way has now become Sodom of the Southwest, and whatever happens there is definitely not staying there: Honeymoon in Vegas is too damn fun to keep secret."
Read more

"It's breezy and fun, full of toe-tapping numbers, witty design touches and frequent bursts of irreverent comic inspiration. But it sputters after a tremendously entertaining first act. This is a 2½-hour musical with maybe 90 minutes' worth of decent material. Ultimately, the show feels slight."
Read more

"It’s a great surprise that the large-scale musical version of the movie is a frothy delight, a pineapple-sweet warm-up in this most frigid season...Vegas has its share of missteps—a few clunker lines, a still-slightly-sexist undertone, and what has to be the only showtune in history about skin cancer. But a gifted, generous cast puts the entire affair over."
Read more

"“Honeymoon In Vegas” answers gloomy Gotham’s crying need for some good old lowbrow farce. Scribe Andrew Bergman has turned his not-quite-cult 1992 movie into a not-quite-knockout Broadway musical.  But with catchy tunes and clever lyrics, sweet comic turns, and a bevy of Elvis impersonators, this brassy little show might brighten up this town over the winter."
Read more

"You think they just don’t make ‘em like they used to? To find out how wrong you are, head to Broadway for a couple of hours of finger-snapping, tap-dancing, hip-swiveling, Elvis-impersonating, night-club crooning fun. That’s what the musical adaptation of Honeymoon In Vegas promises and what it delivers."
Read more

"The sexist values of the show are not so much 1992 as 1952...This is, of course, an old-fashioned musical comedy, a genre not known for its progressive values. And the warm-centered tone is never crass or sleazy. Still, this thing badly needed the safety of some chronological remove, especially given that women buy most of the tickets to shows like this."
Read more

"The rambunctious new musical “Honeymoon in Vegas” is old-fashioned and proud of it. A big orchestra pumps out a brassy, melodic score that nods to Sinatra’s ba-da-bing days. The wacky plot could have been lifted from a 1960s caper. If only parts of the story didn’t cross the line between old-school and antediluvian."
Read more

"There’s plenty to like about the new Broadway arrival “Honeymoon in Vegas.” That goes double for the terrific score. If only the overall production were sexier, funnier and more surprising. As is, the show is cute and old-fashioned, a good time."
Read more

“Here and there, the show starts to soar. During those moments, you feel as though you’re watching a modern-day “Guys and Dolls,” and not yet another forgettable movie-turned-musical churned out for Broadway. But more often than not, "Honeymoon in Vegas” is mired in a pained attempt to enliven and exaggerate a simple but heartfelt story into a broad, over-the-top musical comedy."
Read more

"One has to ask: What drove the creators of the new musical adaptation of Honeymoon In Vegas to think that flimsy film comedy — a chestnut at only 23 years old — could translate to a compelling stage production? As empty-calorie musicals go, you could do worse than this Honeymoon."
Read more

"Honeymoon in Vegas," based on the 1992 film, is an unexpectedly delightful, thoroughly conventional movie spinoff that isn't hard-selling anything more than a good time created by experts. Even the sky-diving Elvis impersonators are charming."
Read more

"Do you remember the movie Honeymoon in Vegas? No one was demanding its upgrade from VHS to Broadway, but we got it so here we are. Jason Robert Brown scored the show, so you think this might be the rare Netflix musical to transcend its genre. Honeymoon doesn’t quite do that, but it does sit on the better end of the spectrum of adaptations that entertain well enough."
Read more