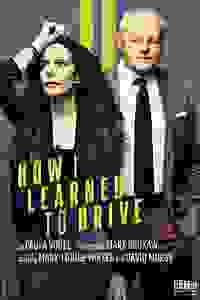 View in admin
How I Learned to Drive (Broadway)
NYC: Midtown W
83
Score it Scored!

How I Learned to Drive (Broadway) NYC Reviews and Tickets

A 1998 Pulitzer Prize winning memory play by Paula Vogel about a woman's struggle with her past.

Over 20 years after its Off-Broadway premiere, Vogel's haunting and empowering play comes to Broadway, reuniting the original cast: Mary-Louise Parker and David Morse.

A woman grapples with her memories of her charismatic uncle, encompassing difficult flashbacks to her tumultuous teenage years, a growing and shifting relationship as she breaks away from her uncle's manipulation, and the path to a new chapter in her future. Please note: this play includes depictions of pedophilia and sexual assault.

Both Parker and Morse were nominated for Tony Awards for the show's long-awaited Broadway premiere. This is Parker's fifth Tony nomination for Best Performance by an Actress in a Leading Role in a Play and if she wins, it will be her third win. The production was also nominated for Best Revival of a Play.

See it if you want to see good performances in a light treatment of a heavy subject.

Don't see it if you expect to be riveted by the topic. Too many super lighthearted comedic scenes never let the pot really boil. This is no Blackbird.

See it if You want to see great performances. Both leading actors are felt very natural. Scenes towards the end were particularly strong.

Don't see it if Serious subject, but much the tone feels comedic, which feels weird & out of place. Pacing issues w/ many scenes dragging. Could be shorter.

See it if Mary louise Parker is excellent! Maybe a Tony for this one! Good cast.

Don't see it if Can be slow at times. Deals with pedophilia

See it if You want to experience MUST SEE theatre! Exquisitely staged, every nuance of this production keeps you squirming in your seat.

Don't see it if You can’t handle very real reminisces of incest and pedophilia and the damage it leaves on young lives…how whole families can become broken. Read more

See it if you want a thoughtful piece on the subject of family sexual abuse - it hits the mark in showing how increasing moves destroy people.

Don't see it if you do not like plays that jump back and forth to different time periods - this made the production slow and less focused for me.

See it if Acutely uncomfortable at first. Then the depth of the characters and mystery of where it is going takes over. Stunning ending.

Don't see it if You can't bear getting more and more uncomfortable yet riveted as the play goes on. Non-linear timeline (starts in the middle).

See it if Fan of the 2 stars or Paula Vogel, wonder if play has endured after 30+ years with original cast, interested in issues of grooming & abuse

Don't see it if you suffer trigger issues about child sexual abuse, too deterred by topic, don't like a 3-person chorus playing multiple roles Read more

91
After "me too" movement, this revival of 1997 tale of seduction & abuse is even more resonant, uncovers the shameful secrets hidden behind a family veneer; ml parker is astonishing

See it if devastating, you hold your breath as builds to searing climax; brilliant script & Parker/Morse are brilliant match

Don't see it if framing each scene as part of a driving lesson (stuck in neutral, etc.) is a little too cute; scenes not involving Parker/Morse are slight Read more

"Vogel’s script creates its own piercing language for assault, harassment and all the ways our society reinforces regressive ideas about gender, sex and consent. The play is structured as an intimate collection of memories roughly organized around a set of rules about the basics of driving, as if someone had sneaked in a series of watercolor portraits between the pages of a driver’s manual. So the warnings about idling and using the reverse gear, which function as clever subtitles announcing the scenes, become subtly tied to the ways Li’l Bit fits those years of assault into her memory."
Read more

"Most good theater lives on, if it’s lucky, only in the memory of those who saw it. Manhattan Theatre Club’s revival of Paula Vogel’s 'How I Learned to Drive,' one of the signal plays of the 1990s, represents an exception. With a firm eye on the rearview mirror, this production reunites director Mark Brokaw, who helmed the show’s premiere at the Vineyard in 1997, with its two exceptional original stars, Mary-Louise Parker and David Morse"
Read more

"Twenty-five years ago, Mary-Louise Parker played Li’l Bit, David Morse played Uncle Peck, and Mark Brokaw directed. Now all three are back for Broadway. Strange things happen when nostalgia gets wrapped up in the production, which is itself a cautionary tale about letting atmosphere (the night, the heat, the past) drug the senses. 'Drive' moves backward in time, revisiting earlier and earlier encounters: What we can just bear to look at when Li’l Bit is 17 gets more awful as she becomes 15, then 13, then 11."
Read more

"Vogel is a genuine wordsmith, and her language here is almost indecently seductive. A list of hard liquor drinks — luscious Pink Ladies, sloe gin fizzes, daiquiris — has the same lilting cadences as a description of a warm summer night under the stars. "
Read more

"Yes, the shiny, stylish model handles great on today’s theatrical highways and bumpy back roads of the Discourse. If anything, it might be too sophisticated a ride for new drivers. Why isn’t Peck’s downfall more satisfying? Why don’t we see Li’l Bit happy and successful later in life? Why does empowerment feel so melancholy? We can ask these questions all day; Paula Vogel will still be up front, eyes smiling in the rearview mirror."
Read more

"'How I Learned To Drive,' opening tonight in a first-rate Manhattan Theatre Club production at the Samuel J. Friedman Theatre, stars Parker as a woman looking back on, and struggling to make sense of, her relationship with her abusive Uncle Peck (Morse)."
Read more

"One thing that is so remarkable about Parker is her comfort on a Broadway stage. During the play, she sits at the edge and speaks to the audience so serenely and unwaveringly. Even big stars sometimes get the jitters and dive their hands into their pockets like a little kid hiding under the covers. Not Parker. Her simultaneous confidence and vulnerability is always worth experiencing, even when the production doesn’t share it."
Read more

"How does one stage a traumatizing play that focuses on grooming, pedophilia, misogyny, and incest? In the case of Paula Vogel's Pulitzer Prize-winning play 'How I Learned to Drive,' which just premiered on Broadway at the Samuel J. Friedman Theatre, Mark Brokaw has opted to direct the most painful moments with a 'folks say the wackiest things' shrug. "
Read more