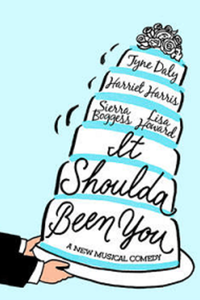 View in admin
It Shoulda Been You
NYC: Midtown W
80
Score it Scored!

It Shoulda Been You NYC Reviews and Tickets

It's a culture clash for the ages when two families from wildly different backgrounds come together to celebrate a wedding. As if the union wasn't complicated enough, the bride's ex-boyfriend arrives, bringing the wedding to a screeching halt and throwing both families into hysterical chaos. Plots are hatched, promises broken, secrets exposed and the bride's resourceful sister is left to turn an unmitigated disaster into happily ever after.

See it if It's a cute musical with a twist. Very entertaining.

Don't see it if you are offended by LGBTQ themes.

See it if You like romantic comedies with a twist

Don't see it if You like shows with a lot of substance or meat.

See it if you enjoy being mindlessly entertained. Nothing new: the happy bride is hokey and, yet, satisfying. Strong performances with meh material.

Don't see it if you want theater to make you think and/or feel. This is muzak. Kinda like a big slice of wedding cake, instead of a real meal. Read more

See it if you enjoy an intelligent musical. The action is funny but the lyrics are well thought out and there is a very interesting twist to plot.

Don't see it if you do not like musicals. I saw the Broadway show and just saw the reading at the 92n St Y. Both were enjoyable. Well cast.

See it if You love quick, funny, fluffy musical comedies.

Don't see it if You like shows that actually make you think.

See it if you like romantic-comedies and are in the mood for something light.

Don't see it if you're not into gay themes or want something thought provoking.

See it if You love a clever new musical. One of my favorite shows of the year! So charming . Amusing songs. Wonderful acting and singing. Great!

Don't see it if Don't enjoy stories about squabbling families. (Even lighthearted ones.)

See it if you enjoy a throwback to the zany hijinx musicals of old. This is fun from start to finish.

Don't see it if you hate fun.

"It’s so aggressively bubbly it gives you the hiccups. Or do I mean acid reflux? In any case, it’s not easy to swallow... There’s not an element in 'It Shoulda Been You' that hasn’t been used, and wrung dry, before. "
Read more

"While the antics are predictable they’re not unenjoyable, thanks to a seasoned and flavorful all-star ensemble...Though the cake is stale, they decorate it well. It shoulda been better but it coulda been worse."
Read more

"'It Shoulda Been You' doesn’t die; the cast is too good for that, and a few well-placed zingers perk up the proceedings. But let’s just say it’s on life support."
Read more

"David Hyde Pierce has staged the proceedings with a brisk expertise that makes the 100 intermission-less minutes fly by. It’s the sort of show that practically redefines the term guilty pleasure...For all its obvious deficiencies, 'It Shoulda Been You' is the sort of shamelessly lowbrow comedy too often missing from Broadway these days."
Read more

"'It Shoulda Been You' is sometimes about as fresh as a week-old danish and the score is largely uninspired. On the flip side, however, you also get to see a bevy of marvelous cut-ups and singers vibrantly giving their all."
Read more

“'It Shoulda Been You' is awfully funny. That’s strange, because there’s nothing especially clever about this musical comedy... These actors know how to get a laugh even when they don’t have a laugh line...Seriously, it’s OK to laugh — although you may hate yourself in the morning."
Read more

"A musical farce that is by turns desperately unfunny and relentlessly preachy. Brian Hargrove’s been-there-done-that plot was already a cliché a half-century ago, and today its whiskery stereotypes are a millimeter away from being actively offensive...It sounds like a medley of discarded theme songs from the pilots of failed ’70s sitcoms. The cast, fortunately, is excellent."
Read more

"It’s terrible. And it shoulda been left in turnaround after years of kicking around agency offices, instead of being offered up for sacrifice in this $7 million vanity production...So much talent, so little show."
Read more