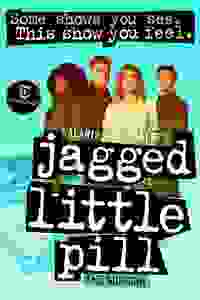 A new musical inspired by the themes and raw emotions in Alanis Morissette’s award-winning album.

Songs from Morissette's Grammy-winning album provides a rock-n-roll-charged soundtrack to the lives of the Healy's: a picture perfect suburban family that is about to explode. MJ struggles with addiction, Frankie wishes her mother would accept her and her sexuality, Harvard-bound Nick witnesses a rape and wrestles with how to act, and Steve is attempting to rekindle his marriage. Directed by Diane Paulus, the show is an emotionally cathartic rollercoaster of a ride. Please be aware that this production features descriptions of sexual assault.
Read more Show less

See it if You want to see a powerful, energetic, imaginative interpretation of our super charged social climate with kick ass dance moves that rock!

Don't see it if You’re a misogynist...supported Brett Kavanaugh for the Supreme Court or the Orange Turd in the White House. You need to but you’ll hate it. Read more

See it if If you like a story set to music . Really great singing in this show. If you like alainis Morsettes music.

Don't see it if If you do not like Morsettes music which can be an acquired taste. Some deep topics in the story line.

See it if Salad of current issues tossed into a dysfunctional family drama. Loved the music. Powerful songs & performances amplified the intensity.

Don't see it if “Too many” issues (#metoo, gender, opiods, etc). Melodramatic & preachy. Characters defined by their issues. Read more

See it if you would like a musical with great choreography and important messages wonderfully presented to people of all ages by a talented cast.

Don't see it if you want a musical where you hum every song and everything is always happy. Here you are faced with current concerns and their difficulties

See it if you're interested in new on stage technology, dark themed musicals, acrobatic dance or the music of Alanis Morissette.

Don't see it if you're hopping for light entertainment not rape, drug abuse & racism. Its difficult to hear lyrics accompanied by overproduced orchestration

See it if you enjoy Alanis Morissette’s music, and you don’t care who’s singing it.

Don't see it if you enjoy Alanis Morissette’s music, and you do care who’s singing it. Read more

See it if you want to see 2 fine performances by Stanley & Patten. Also, this is one of the best juke box musicals as there is a cohesive book.

Don't see it if you do not like the music of Morissette. Also, if don't like musicals that are "downers". Many serious themes are explored in this show.

3/5 stars. "Directed by Diane Paulus, Jagged Little Pill has moments of exciting stagecraft and performance…But the show has a faintly medicinal flavor...What gets lost in the mix is Morissette's individual voice-the sound of one person insisting on the right to be different things at the same time."
Read more

Grade: B. "'Jagged Little Pill' arrives on Broadway as a musical with angst to spare"
Read more

"Alanis Morissette’s 1995 alt-rock album turns up on Broadway in a story that seems to spring organically from the music."
Read more

"'You Oughta Know' is the thrilling highlight of the musical-which also points up the flaws in everything around it."
Read more

"You oughta know this about ‘Jagged Little Pill’: It’s hard to swallow as a Broadway musical."
Read more

"'Jagged Little Pill' proves to be one of the most artistically sound, well-integrated and crowd-pleasing jukebox musicals to materialize on Broadway in some time."
Read more

"'Jagged Little Pill,' much like 'Next To Normal' and 'Dear Evan Hanson,' is concerned with the collateral damage inflicted on us by family and social pressures. And given Morissette's empowering lyrics, in this #MeToo era, the entire show becomes a moving anthem of our time."
Read more

"Arguably messy and overly ambitious at times. But damned if it doesn't set a new aspirational standard for the subgenre referred to mostly in scoffing terms as the 'jukebox musical.'"
Read more

"SIDE EFFECTS: The Alanis Morissette jukebox musical features vibrant performances, but other issues drag it down."
Read more

"But, as with most jukebox musicals, far too many songs simply don't connect enough to the surrounding story. At times, it actually seems as if a surprise concert has broken out during a play. Rather than attempt to bring these disparate pieces together, Paulus instead turns into the skid."
Read more

"Patten is humble on the stage, but there is serious power in her thoughtful performance, which brought us to all to our feet. Seriously, the guy next to me who could barely stand without help, got up to cheer."
Read more

"The overly issue-ladened musical strives to encompass so much, telling so many tales of importance, and somehow pulls them all off in a way that just about works."
Read more

"As heartfelt a musical about a troubled family as 'Next To Normal,' as full of jaunty and jumpy rock rebellion as 'Rent,' it's hard to dismiss as just another jukebox musical…But even the most exhilarating number illustrates the inherent problems in fitting a new story around old hits."
Read more

"Elizabeth Stanley, in the performance of her career, is positively shattering as matriarch Mary Jane, who bravely (if foolishly) attempts to maintain her air of perfection and poise while her world crumbles and almost destroys herself completely in the process."
Read more

"'Jagged Little Pill,’ well-performed and slickly produced, never convinced me of its necessity…Its incorporation of Alanis Morissette’s music, written from other motives, in a story of family dysfunction and social unease, seems more a wishful concept than a work of organic integrity."
Read more