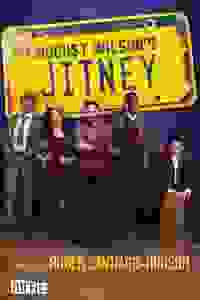 Manhattan Theatre Club presents the Broadway debut of August Wilson’s play about a group of African-American cab drivers eking out a living in '70s Pittsburgh. Winner of the 2017 Tony Award for Best Revival.

When the city threatens to board up the business and the boss’ son returns from a 20-year prison stint, tempers flare, potent secrets are revealed, and the bonds between these men start to come undone. MTC has a long history of co-producing works by this legendary playwright, including 'King Hedley II,' 'Seven Guitars,' and 'The Piano Lesson.' 'Previously produced Off-Broadway, 'Jitney' is the last of Wilson's 'Century Cycle' plays to make it to Broadway, and is directed by Tony winner Ruben Santiago-Hudson.

See it if JITNEY has great strengths and weaknesses. It is a lively slice-of-inner city life in the 70s. Well acted and staged. Many men, one woman.

Don't see it if Two of the main conflicts--father/son and lovers--felt forced. Some of the dialogue and situations are clunky. Still, an important piece.

See it if You want to see stellar acting. I was completely absorbed throughout. The ensemble was stellar in this well staged work. Highly recommend!

Don't see it if Heavier dramas are not your thing or if you don't like character driven works. You are not a fan of August Wilson plays.

See it if you're a fan of Wilson, want to see some great acting by a fool-proof cast, enjoy realism, like humor/tragedy blends

Don't see it if you're not a fan of Wilson, don't like plays that require concentration, have difficulty sitting 2-1/2 hours, subject matter not of interest

91
Fine production of one of the best plays by august wilson, the american "shakespeare" of the modern black experience

Don't see it if first half plays as near-farce, second as Greek tragedy; would be more effective if tonal contrasts not as stark Read more

See it if you love theater. We have seen 3 versions and this is the best. My first 100 rating. We have seen all 10 plays in the cycle and Jitney ...

Don't see it if Sorry, I cannot come up with a reaosn to miss this production Read more

See it if You're a Wilson fan or want to give his plays a try. It's one of his most accessible -- both funny and touching. This is a great production.

Don't see it if You're interested in a play with a more female-centric voice. This Wilson play is sorely lacking women.

See it if you like to see theater that feels truly honest and also truly compelling.

Don't see it if you're more interested in plot-driven shows than (excellent) slice-of-life shows.

See it if Very beautifully and lovingly written, acted, directed and staged. Excellent sets and lighting. A very satisfying evening of theater.

Don't see it if you prefer action, this is a slice of life story, it's all about the characters. If you prefer musicals, just know this productions sings.

Conversation sings and swings, bends and bounces and hits heaven smack in the clouds, in the glorious new production of August Wilson’s 'Jitney'...Acted by an impeccably tuned ensemble...There’s no way a theatergoer can watch 'Jitney' without feeling the pulsing, defiant aliveness of every character onstage...Conversation becomes performance art, and part of the pleasure of watching this peerless cast is the delight its characters take in listening to the others riffing."
Read more

"A soul-sustaining, symphonic piece by a late, great master, about fathers and sons, workers and their dreams—deliverance for audiences hungry for soaring language and tough truths. Director Ruben Santiago-Hudson steers a powerhouse cast through the dense alleyways and along the majestic avenues of Wilson’s language...It’s not driven by plot so much as the impulses and chemistry of the characters. And they have been incarnated to perfection by a great group."
Read more

"The skills Wilson always possessed are jammed up against those he acquired with experience and distance. Santiago-Hudson’s staging tries to honor both, but is limited by the patchwork text...These feints at a kind of plot-by-collage keep devolving into sitcomery; the speeches that later in Wilson’s career would achieve a kind of oracular magnificence too often feel like filler...If in 'Jitney' we see the marks of Wilson’s ambition but not yet the payoff, that only makes it more valuable."
Read more

"Actor-turned-director Ruben Santiago-Hudson's natural feel for the plays of August Wilson yields a superb production...It takes considerable skill to conduct the musical movements of Wilson's dialogue with the fluidity achieved here...There's not an actor on the stage who doesn't thoroughly inhabit his or her flavorful character, from their singular speech patterns to their own particular walk or physicality. All of them deserve the highest praise...The result here feels just as revelatory."
Read more

"By turns hilarious and devastating, this is an emotionally bruising gem of a play...Wilson’s dialogue captures the cadences of the day in a manner both timely and timeless...The talented cast soars under the confident direction of Tony-winner Ruben Santiago-Hudson...From the stellar performances to the sharp script, 'Jitney' is a substantial piece, and a breath of fresh air to boot."
Read more

"One of Wilson’s best plays...As one of his most realistic plays, 'Jitney' is filled with sharply observed characters who don’t immediately reveal themselves to the naked eye...His heartfelt feelings for his characters made Wilson a master of the ensemble play structure, which lives and dies on the human comedy of its characters...Under Santiago-Hudson’s sure hand, you can’t help but relish the performances."
Read more

"Wilson’s play is so disciplined, so full of distinctive voices with their own pungent passions and fears, and so meticulously brought to life by a taut ensemble feelingly directed by Ruben Santiago-Hudson that we fully accept this world as it is given to us in this production...By great good fortune it is also possible to see the same thing happen right now in Denzel Washington’s filmed version of 'Fences.' Neither should be missed."
Read more

"A superb production under the direction of Ruben Santiago-Hudson, a strong Wilson hand...It’s the work of a young playwright not yet fully in command of his prodigious gifts, yet already confident in voice and in the creation of characters who are as specific to their place and time as they are universal in their flaws, hopes and dreams."
Read more