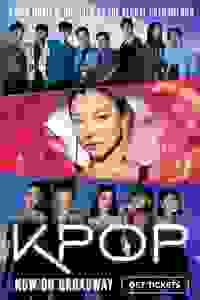 The critically acclaimed and award-winning Off-Broadway musical about the global phenomenon known as K-pop comes to Broadway in a multimedia experience.

'KPOP' premiered at Ars Nova in 2017 and was nominated for seven Drama Desk Awards and won the Lucille Lortel Award for Outstanding Musical. When the show goes to Broadway, composer Helen Park will be the first Asian-American female composer to have a show on Broadway.

See it if Really good dancing and cheography. Singing too was good.

Don't see it if Weak book. lighting was blinding at times.

68
Tries 2 bring korean pop phenomenon to u.s., Manifold weaknesses but has its intense fans, Should kpop on bdway have been cancelled so soon?

Don't see it if what may have done it in: really lame plot w/o wit or urgency/contrast Jersey Boys; charctrs undifferentiated; unvaried choreo, tunes

See it if you like a highly energetic show with great musical and dance numbers by a young cast with good voices. Not heavy on plot.

See it if you enjoy KPOP music, electric choreography, or musicals that create a concert-type environment (like Six).

Don't see it if writing matters to you. The story is flimsy and melodramatic. You don’t go to this show for the story; you go for the musical numbers.

See it if A new & youthful form of music has come to Broadway with great singing and precision dancing courtesy of South Korea.

Don't see it if While the plot was old & lacked creativity, those looking for a serious drama might want to skip this one.

78
Entertaining, Better for those under 20, Disappointing, Great dancing, Ambitious

See it if you are a fan of this genre of music or you just would like to experience it. It was fun to watch, but convoluted plot didn't work.

Don't see it if you need a real plot, not just something created as a back drop for the musical numbers. Or you don't like teeny-bopper music.

Don't see it if you dislike very loud music, extremely bright lights and expect a story & plot that is not typical & cliched.

See it if You want to see a fantastic cast perform some great K-Pop music.

Don't see it if You are looking for a musical that will leave you thinking about it long after you leave the theater. Read more

"In its remaking for Broadway I wish 'KPOP' had preserved more moments ... that allow you to consider what the excitement of K-pop (for those who feel it) and the expressiveness of American musical theater (likewise) can profitably say to each other."
Read more

"Adapting 'KPOP' for Broadway was never going to be an easy task, and the effort to do so is commendable. But somewhere along its rise through the air, the musical’s bubble has burst. It’s just OKpop now."
Read more

"There’s a lot in the musical 'KPOP' that makes for a successful show, including a winning ensemble, melodies that sneak into your ears and stay there, and rhythm-perfect choreography. But it has a curious inertia. It lacks drama."
Read more

"While the overall plot doesn't quite hit its mark, 'KPOP's' stellar musical numbers and all-star cast are able to turn the beat around into a solid, feel-good joyride that both K-Pop and musical fans can appreciate."
Read more

"The vulnerability behind what it takes to go big or go home is the secret, beating heart of 'KPOP,' a pulse that brings life to every chorus of its playlist."
Read more

"Beyond the echo-chamber narrative, there’s much to like. There’s an irresistible cast of performers — 18 of them are making Broadway debuts — and attention-getting work by the design team that delivers the goods and then some."
Read more

“ 'KPOP' felt like it was struggling to fulfill all the complex expectations it was facing, ironically a manifestation of its own internal themes."
Read more

"There's not a weak link in the cast, which features some of the best vocalists and dancers on Broadway right now."
Read more