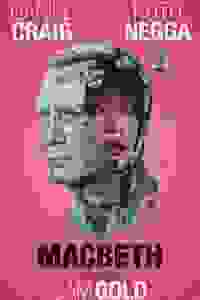 A strictly limited engagement of Shakespeare's infamous tale of betrayal and murder. 'Macbeth' tells the story of one couple’s obsession with power. For 15 weeks only, celebrated actors Daniel Craig and Ruth Negga, in her Broadway debut, star in this new productio directed by Tony winner Sam Gold ('Fun Home').

The rest of the cast includes Tony nominee Amber Gray ('Hadestown') as Banquo, Grantham Coleman ('The Great Society') as Macduff, and Maria Dizzia ('Orange is the New Black') as Lady Macduff.

See it if You want to see some great acting in a MacBeth that’s a bit stylized, for no apparent reason. Many directing choices baffle but entertain.

Don't see it if You’re a purist. You may find yourself leaving at intermission. If you can just enjoy the ride I think it all kind of works well enough. Read more

See it if you love Macbeth and enjoy seeing new interpretations of the work. With few exceptions, the performances are excellent.

See it if you’d enjoy a modern yet straightforward take on a Shakespeare classic with a cast full of great actors.

See it if you love all of Sam Gold's work, want amazing performance by Negga and an excellent one by Craig, want experimental take on Shakespeare, *

Don't see it if Shakespeare purist (a couple of famous lines either deleted or downplayed), don't like blood/violence, actors playing more than 1 role, Read more

See it if you like Sam Gold. Craig better than his notices. You dont mind busy furniture movement. I liked the narrator. Great theater.

Don't see it if Negga was AWOL. I didn't notice her suicide. Hated the witches-making omelets? Being "cute" for no reason, it's Will S; get out of the way Read more

Don't see it if want a well put together play. actors felt as if they were in different plays together. terrible direction and staging.

80
Fresh spin on a classic that doesn’t always hit its mark, Negga shines, An homage to human tragedies as a whole, Thought-provoking (not always in a good way), Uneven performances

Don't see it if you find Gold’s work too “hit-or-miss” and didn’t enjoy his King Lear. Here, we have a more solid piece, but a lot of misses and messes. Read more

"Despite the star power of Daniel Craig and Ruth Negga, the overthought production that opened on Thursday at the Longacre Theater seems unsure of its welcome, as if a classic that has enjoyed nearly 50 Broadway revivals since 1768 might no longer find an audience willing to meet it halfway."
Read more

"The kind of passive-aggressive theater party that invites two big stars to attend—Daniel Craig and Ruth Negga as the regicidal title couple—and then makes a point of ignoring them. Short, eloquent, violent and packed with sensational business (murder! witches! madness! ghosts! a decapitated head!), 'Macbeth' is usually one of Shakespeare’s most exciting plays. Not so here: Deliberately murky, this anemic modern-dress production creeps at a petty pace from scene to scene, to the last syllable of the tragedy’s verse and beyond into a wistful folk-song coda."
Read more

"It’s an unusually bare staging for Broadway, stuffed with ideas but stripped clean of folderol. For the majority of the company, director Sam Gold has settled on a kind of still-in-rehearsal vibe, with big events whirling up out of an empty theater lit dimly by ghost light. Who is a witch and who is a laird in any single moment seems fluid — appropriately for a cast hamstrung repeatedly by COVID setbacks, anyone might play anyone. In contrast, Craig and Ruth Negga, as Lady Macbeth, are incontrovertibly stars, gliding across the space like slow, gleaming peacocks. They are dressed differently, conceived differently, even move differently from the rest. The result is oddly cool and lonely. "
Read more

"We’re there to witness the latest attempt by the maddeningly inconsistent director Sam Gold to infuse new life into a classic play. Perhaps we should have taken a hint from the production’s marketing, which prominently features the names of the stars and director while Shakespeare’s is nowhere to be seen. In retrospect, that seems appropriate, since this is far more Sam Gold’s 'Macbeth' than the Bard’s."
Read more

"Gold's choice to incorporate these various interruptions adds novelty, though they also steal something from the momentum. The actors frequently carry portable smoke machines and spotlights to create their own atmosphere as they go and freely bend the elasticity of Shakespeare's language to their will, bringing the audience in on the joke via tweaked physicality and implied winks to the balcony. "
Read more

"It is in no way original to focus, as a curtain speech tells us here, on the witches and what we might call the generally creepy vibe of the play. Under all the fog (and there is a lot of it), there isn’t much substance in this production, which clearly prioritizes an aesthetic and a mood over acting, coherence and Shakespeare’s text."
Read more

"Hie thee to the Longacre Theatre, should you be interested in seeing one of the more dismal Shakespeare productions ever to grace—or rather besmirch—a Broadway stage in recent memory. The highly anticipated production of 'Macbeth,' starring Daniel Craig and Ruth Negga, closes the pandemic-plagued Broadway season on a dispiritingly dreary note. Misguided in execution and largely indifferently acted, this minimalist production does no favors to either of its talented stars."
Read more

"In one of Gold’s riskier directorial flourishes, the dead of 'Macbeth' never really leave. Even aside from the usual ghosts and apparitions, Gold’s stage will be populated by the sitting, silent victims of all that bloodletting, a choice that casts an appropriately spooky spell even as it – along with an unnecessary, weirdly upbeat visual coda – ultimately undercuts the wreckage and finality every bloody 'Macbeth' deserves."
Read more