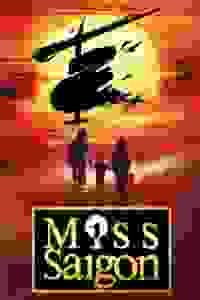 Inspired by Puccini's opera 'Madame Butterfly,' Alain Boublil and Claude-Michel Schönberg’s 'Miss Saigon' is an epic and tragic love story about the relationship between Chris, an American GI, and Kim, a young Vietnamese woman, during the final days of the Vietnam War. A runaway hit in its original incarnation, 'Miss Saigon' was the 13th longest-running show in Broadway history.

See it if I would put up there with the great classics. It has everything, great music, acting and staging. It is a powerhouse of a musical.

Don't see it if it is a period piece, it can get slow for some.

See it if You want to see a near perfect production of a classic tragedy. Love. Loss. Denial. Innocence. Cowards. Heroes. Good and evil. Its all here.

Don't see it if You're looking for laughs or if you didn't like the original. This is exactly like that one only with all the staging "umphed up".

See it if Tainted review as cell phone light rudeness ruined my show. One of my faves; all must see, original version was better. Engineer was great!

Don't see it if Everyone really should, but FOR THE LOVE OF GOD TURN YOUR PHONES OFF!!!!

See it if Great music, dancing, and production. J.Briones as the pimp (“Engineer”) was funny and engaging. The story had some substance.

Don't see it if Dated gender stereotypes. Egocentric view of United States. Kim’s unnecessary sacrifice of herself at the end was not believable.

See it if you can get past the exploitative nature of the story to enjoy a revival that's grander, more charged & better cast than any pvs incarnation

Don't see it if you can't handle a little over-sentimentality, irksome melodrama, racial stereotyping & a histrionic (though beautiful, at times) score.

See it if wish to see a winner. Tremendous improvement in mistakes made in the original.. Powerful depiction of wartime tales. Casting imp since 91

Don't see it if you need an upbeat show, This does include many sad decisions made by the U.S and individuals. Perfection does not exist.

See it if You intensely love this show or are nostalgic for grand, overstuffed, lavish, dramatic musicals from the 1990s.

Don't see it if You're not a fan of this show (this revival is nothing new, save two great leads and a few new lyrics) or other Les Miz-style musicals.

See it if you're a fan of romantic dramas with high stakes and a gorgeous score. The performances are superb. Eva and Jon Jon are mesmerizing.

Don't see it if you're not a fan of classic musicals, romantic stories, or happy endings.

"'Miss Saigon' is as mechanically melodramatic as any theatrical potboiler from the early 20th century...It’s not as if such stories don’t still have the power to stir suspense and tears. But this eventful, sung-through production out of London, directed by Laurence Connor, feels about as affecting as a historical diorama, albeit a lavishly appointed one. This despite the hard and dedicated work of its earnest cast."
Read more

"It’s less a song-and-dance affair in any recognizable sense than it is an ’80s summer movie, weighed down with ridiculous special F/X...Boublil’s lyrics are awfully leaden and generic, and Schönberg churns out predictably pseudo-Asian passages throughout the score—pentatonic patterns, flutes and plucked strings—the musicological equivalent of yellowface...Diversity on Broadway should be celebrated, but give actors of color characters we all can care about."
Read more

"In condemning the exploitation of the Vietnamese while in alternate breaths exploiting them for Broadway-scale titillation, the show tries to have it both ways...It’s one thing to dramatize the degradation of women; it’s another thing to wink while doing it...The unrelieved hyper-emphasis of Laurence Connor’s direction basically squashes whatever might be good in 'Miss Saigon'...I am also sorry to report that the helicopter looks like a manatee."
Read more

"Sure, it's a brash, broad-strokes saga with questionable racial and gender representation and a taste for salacious vulgarity. But although director Laurence Connor has adhered to the basic contours of the original, his grittier approach exposes teeth in the material that I don't recall previously being so sharp...Noblezada is a legitimate discovery, just as Salonga was the first time around...This is brawny, crowd-pleasing entertainment."
Read more

"The show is completely sung-through, which was common in the ’90s but feels a bit dated today. Further, much of those songs are sweeping, melodramatic ballads...Eva Noblezada is probably the show’s biggest wow (sorry, helicopter)...In general, this new iteration has a more appropriately gritty feel than the show had in the ’90s, from the physical set to the portrayal of Americans and the consequences of war. Still, it’s a pretty darn schmaltzy show to begin with."
Read more

"Classy revitalization of an old, presumably boring property that proves to have plenty of life in it yet. The upscale revival should bring a tear to old-timers with romantic memories of the original schmaltzy score, while titillating newbies...The production values alone are a jaw-dropper...And just wait for his big getaway in 'The American Dream,' a show-stopper—and a career-maker for Briones."
Read more

"It’s an opera for the tone-deaf: The dramatic gestures are broad and banal, and the faux-rock songs are exercises in louder-is-betterness whose tunes go round and round in tight little circles of melodic monotony. As for the lyrics, by Mr. Boublil and Richard Maltby Jr., they’re by turns tawdry and trite...While 'Miss Saigon' has a can’t-miss plot—it’s as potent today as it was for Puccini—the score, at least to my ear, is unendurable."
Read more

"This production is sensational in every way: visually and sonically (often painfully so). Most important, it’s brilliantly cast...'Miss Saigon' is a show that eats its cheesecake and has it too, like a skin flick that runs a banner at the end promising to donate proceeds to a home for wayward girls...The show’s high point, 'The American Dream'...is more chilling than I’ve ever seen it...The production’s other big discovery is Eva Noblezada...Noblezada radiates conviction."
Read more