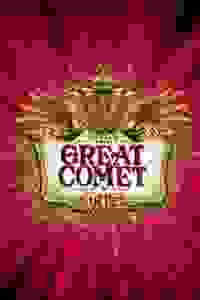 Inspired by a 70-page slice of Tolstoy’s 'War and Peace,' this immersive, Off-Broadway hit transfers to the Main Stem.

Natasha is young, Anatole is hot, and Andrey isn't here. But what about Pierre? Natasha is a beautiful ingenue visiting Moscow while she waits for her fiancée Andrey to return from the war. In a moment of indiscretion, she is seduced by the dashing (but already married) Anatole and her life is ruined. Her only hope lies with Pierre, the lonely outsider whose love and compassion for Natasha may be the key to her redemption. Featuring a score that mixes rock, pop, soul, folk and electronic dance music with classic Broadway, 'The Great Comet' arrives on Broadway after its critically acclaimed 2013 Off-Broadway premiere. Its creative team has re-imagined the Imperial Theatre as an opulent Russian salon, where every seat provides a unique perspective.

See it if You want to see a truly original show, from its unique staging to its glorious content. A beautiful ensemble piece. Sit on the stage.

Don't see it if You want to see an old fashioned Broadway musical. This has a new and exciting look and sound.

See it if You want a theater experience unlike most and you want to see a great cast in a true musical headed by Josh Groban.

Don't see it if you cannot tolerate new concepts, various styles of music, strobe lights and tons of action.

See it if you enjoy frenetic events. An opera where everyone sings dances & plays instruments. It helps to review War & Peace Cliff Notes before going

Don't see it if having to look in all directions at once annoys you. Performers use every unoccupied space in the ingeniously re-designed theater.

See it if Impressive, immersive staging by Chavkin combined with the unconventional, unique music/lyrics of Malloy make for an exhilarating evening

86
The most spectacular immersive musical theater i have ever experienced

Don't see it if this is essentially a romantic melodrama - spectacularly done - but still a melodrama; many good but no breakout performances Read more

See it if You enjoy lavish, clever, immersive staging that makes you feel like you're a part of the show.

Don't see it if You're seeking a well-written musical, or don't want to follow a confusing plot. The would be a total snore without the exuberant staging.

See it if you've never seen Grace McLean or Amber Gray perform before. They are so wonderful.

Don't see it if you like to watch a story unfold instead of hearing the characters tell you what they're doing when they're doing it.

See it if You love War and Peace and the actors performing in this show. Are curious to see what all the fuss is about.

Don't see it if You don't like immersive theater. I know this is the draw for many, but to me it was extremely distracting and annoying. Read more

"Who would have guessed that Dave Malloy’s gorgeous pop opera would land on Broadway with all its signal virtues intact, and in some ways heightened?...The show remains a witty, inventive enchantment from rousing start to mournful finish...O.K., so it’s a little dense...Even if you get lost for a bit, the dazzling staging, the vivid performances and the richness of Mr. Malloy’s music will provide pleasures that go well beyond the narrative."
Read more

"Director Rachel Chavkin’s approach to the show—spectacular yet intimate, theatrical yet personal—is an ideal complement to Malloy’s brilliantly unconventional musical...In Malloy’s complex and eclectic score, lovely stand-alone songs are woven into a larger blanket of recitative and surprising combinations of content and genre...Bittersweet and joyous, artful and accessible, this is a Broadway party like no other...It’s a wonderful, soul-stirring escape."
Read more

"If 'Natasha' used this gorgeousness to set up a contrast with the characters’ turpitude, or to bring its world crashing down at the end, it might seem less vapid...Groban sings not just beautifully but without irony; almost alone among the cast he makes real connections to the ideas behind the words...The misalignment of source and style is so severe in 'Natasha' that it seems like an example of elitist decadence rather than the condemnation of it that Tolstoy intended."
Read more

"It arrives on Broadway in superlative shape, its humor, emotional content and rip-roaring storytelling every bit as vibrant as its madly infectious score...No disrespect to the marvelous cast, many of whom have been with the project since its earliest stages, but the true stars are the material and production, which is often as cinematic as it is blazingly theatrical...Chavkin's direction is a marvel of intricacy, with simultaneous action happening in multiple spots...Don't miss it."
Read more

"The staging is remarkable considering all its moving parts, and the gifted young ensemble, often cycling at full tilt through multiple roles, earn every ounce of sweat and confetti. But the end result feels a little too much like zero-calorie entertainment (well, not counting the pierogi): brisk and sexy and emotionally weightless. The flow of the story never quite takes hold, and the stakes for these star-crossed lovers feel no more or less crucial then the next musical number tells us it is."
Read more

"A luscious, 360-degree immersive experience that feels like being smothered in velvet...You really don’t want to miss a thing in this musically lush and visually opulent production...Malloy, who wrote the marvelous book, tuneful music, and smart lyrics, understands and even admires the members of this aristocratic society, who in ensemble songs reveal themselves as irresistibly charming and hopelessly corrupt."
Read more

"For all its explosive liveliness, Ms. Chavkin’s staging looks like a hopped-up concert version of a musical, not a bona fide Broadway show, and it serves mainly to paper over the essentially undramatic nature of 'The Great Comet,' which feels less like an opera than a cantata...There’s more than one way to write a show, and I freely acknowledge the extreme cleverness and originality of 'The Great Comet.' I just wish it didn’t seem at least 45 minutes longer than it really is."
Read more

"I can pretty much guarantee that no one attending this gorgeous evocation of 19th-century Moscow will leave convinced they didn’t get their ruble’s worth...The book and score by Dave Malloy take great pains to spell it all out for us, often to the exclusion of, oh character development, motivation and feeling...Malloy is an inventive composer of not very beautiful music...All this action delivers pleasure for the eye and, intermittently, the ear. But not for the soul."
Read more