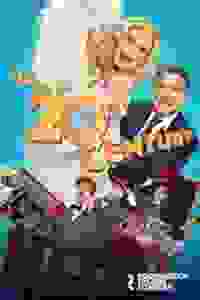 View in admin
On the Twentieth Century
NYC: Midtown W
83
Score it Scored!

On the Twentieth Century NYC Reviews and Tickets

Tony winner Kristin Chenoweth and Golden Globe winner Peter Gallagher star as a temperamental actress and an egomaniacal impresario in a revival of the Tony-winning musical comedy.

It’s nonstop laughs aboard the Twentieth Century, a luxury train traveling from Chicago to New York City. Luck, love and mischief collide when the bankrupt theater producer Oscar Jaffee embarks on a madcap mission to cajole glamorous Hollywood starlet Lily Garland into playing the lead in his new, non-existent epic drama. But is the train ride long enough to reignite the spark between these former lovers, create a play from scratch, and find the money to get it all the way to Broadway?

Don't see it if you don't like perfect musicals

See it if You like classic musicals, enjoy excellent music, are fans of Kristin Chenoweth and overall excellent performances.

Don't see it if you don't like musicals... What's not to love about this show?

See it if you love musicals or KCheno (she had to sip water thruout). Great set, costumes, big cast...but TC didn't gel. Wasn't crazy about Gallagher.

Don't see it if you want to be fully engrossed from start to finish. Some wonderful numbers, but not all (I found Babette annoying). Lavish production. Read more

See it if You're a big Kristin Chenoweth fan and want to see her at the top of her game.

Don't see it if Don't like quirky musical comedies that may not always deliver on laughs.

See it if you like light, madcap musicals with hilarious performances.

Don't see it if you're in the mood for something heavy and thought provoking.

See it if you can muddle through a weird show for the amazing performances of Andy Karl, Mary Louise Wilson, and the 4 tap dancing porters.

Don't see it if you're expecting great work from the leads.

See it if Kristen Chenoweth, Peter Gallagher, Andy Karl and Mary Louise Wilson were fantastic. The sets were beautiful and intricate.

Don't see it if You don't like light hearted musicals. Although this is one is so good I'd ecommend it anyway. You might find that you like it.

Don't see it if Score was not terribly memorable.

"In the theater, there is overacting. Then there’s over-the-moon acting, which is rare and occupies its own special cloud land in heaven. I am delighted to report that this latter art is being practiced in altitudinous-high style...Scott Ellis’s ripping, lavishly appointed revival of this 1978 musical about dueling giant egos knows that when it comes to being hyperbolic, there’s no people like show people...sit back, relax and savor the blissfully bumpy ride in luxury accommodations."
Read more

"The 1978 musical itself is written in an affectionately arch style that combines comic operetta with farce and screwball sex-battle comedy...The action and the notes are at a higher pitch than we’re used to...'On the Twentieth Century' may be a cartoon, but it’s a Hirschfeld cartoon, and worth a trip."
Read more

"Especially when it moves and sings it sparkles like new, with each small detail detailed as if for the first time. But not everything works...The score, like the somewhat wayward script, only coheres under certain conditions, few of which are available anymore."
Read more

"This strained farce is a musical stubbornly lacking in locomotion, its steam engine spouting plumes of desperation. While director Scott Ellis has a proven track record with comedy, he's off his game in this belabored revival...People sitting near me were roaring with laughter, so the show's cornball humor was obviously working for some. But while I was ready to be taken on a delirious musical journey, the train never leaves the station."
Read more

"Roundabout Theatre Company's ultimate chase-the-blues-away confection...It’s hard to remember a recent production in which the cast was so uniquely suited to each and every role...In fact, On the Twentieth Century is so generous a vehicle (pun completely intended), it even lets the porters have a bona fide showstopper. It’s one of many affectionate moments you’ll be reflecting on later, wishing life was this train."
Read more

"Scott Ellis’s dazzling production of 'On the Twentieth Century' looks like one of those legendary Broadway musicals that exists largely in our collective memory of great shows we never saw...For a lot of us, this is the show of our dreams...The plot is pure screwball comedy with some classic farce moves for broader chuckles."
Read more

"So you’re looking for a good time? Look no more: The Roundabout Theatre Company’s revival of “On the Twentieth Century” is is the best musical to hit Broadway since 'On the Town'... it’s a fluffy exercise in high-octane pleasure, blessedly devoid of deep thought and certain to satisfy anyone not congenitally po-faced... 'On the Twentieth Century' isn’t perfect—but it’ll do quite well enough."
Read more

"It deserves as long a run one could wish for a charmingly silly homage to the old-fashioned operettas that were once a mainstay of Broadway but whose time had long since passed when the show opened in 1978...Scott Ellis’s production works very hard at solving the show’s problems, with mixed success...'On The 20th Century' reveals Comden and Green in their twilight, the brilliant magic evident, but fading."
Read more