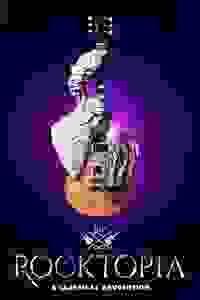 This musical extravaganza celebrates the fusion of the best rock songs of the past century with some of the greatest classical music ever written. Now on Broadway through April 29 only.

See it if If you like a corny story with okay/ average music.

Don't see it if It is not really worth seeing, Dee Snider is washed up and tired in this production. If you like a good musical with a good story.

See it if you want to see classic rock karaoke w/a PowerPoint backdrop of random stock images & some classical music thrown in to make it feel grand.

Don't see it if you have to wash your hair or do some laundry. Read more

See it if Not what one would expect on Broadway Great visuals, great lighting, great sound. Superb violinist, Our fav. the 3 Freddie Mercury . songs

See it if Classic rock power balladry mashed with operatic elements(Handel and Elton;Harrison and Puccini). Great music remains great regardless.

Don't see it if Concert is shaped by visiting guest icon, your evening is left to the booker. Strings in rock music? Thrilling at times. Insipid slide show.

61
Disappointing, Overrated, Something in vegas, Some good singing

See it if You want to see classic and different music playing. If you like a big production remind me of a Vegas show.

See it if you enjoy a spectacle of singing, orchestra and chorus mixing classical and pop music. Great staging and lighting. Many good numbers.

Don't see it if you like a musical with a plot.This is a concert. Don't see if you take your pop or classical music only done straight. Read more

Don't see it if You're expecting a NY-caliber show: this is unworthy of Broadway + most music venues, open mics & showcases here. Skip it.

51
Just.a loud glorified concert. not a broadway worth vehicle

See it if You like concert loud versions of songs.

Don't see it if You don't like loud concerts.

"About two hours in, the touring concert...had settled into a benign, dull groove. Then the slide show, which until then had been mostly sunsets and rolling clouds, jolted me awake...The vocalists generally acquit themselves well enough...Ultimately, the real problem is the set list's utter blandness...Taken individually, these songs are in the canon for a reason, of course; one after another, their effect is numbing."
Read more

"Heads bob. Arms sway. Hands clap. And, frequently, eyes roll - at least mine did...Blurs the lines between famous rock hits and classical ones...Gets old fast because a sameness sets in...Too much lung-busting, facial-distorting 'American Idol' -style singing and a Celtic violin overload...Clearly co-creators Evan, who also sings, and conductor Fleischer like to think big. But they don't always think coherently...Weirder still is the who's who projected on stage."
Read more

"Turns out to be far more on the rock side of the concept than on the classical side...The result is thoroughly half-baked...Even when the mash-ups sounds more or less smooth there's nothing new to be gained...More invested in pandering to baby boomer nostalgia...Whatever crumbs of pleasure are to be found...come solely from the singers...Considering how unevenly balanced the acoustic is, one can't help but wonder if it was even worth bringing in the orchestral elements."
Read more

"A huge problem with the classical moments is that though were composed to be performed without amplification, 'Rocktopia' blasts them through the sound system with the same lack of finesse used for hits by Elton John and Styx. Perhaps if they pulled a full switcheroo, having the classics performed in rock style with the newer stuff unplugged and given the longhair treatment, 'Rocktopia' would have a little more bite to it."
Read more

"A big, loud, in-your-face, knock-down-drag-out evening of very well-known classical melodies, very-well known classic rock tunes...A lot of the mash ups were less than graceful. Yes, the setlist was all arena rock anthems. Yes it caters to baby-boomer nostalgia. Yes, some of the projections were just silly...It is, however, a hell of a lot of fun! What it may lack in sophistication, it makes up for in pure exuberance. It is two plus hours of loud, ruckus, joyful noise."
Read more

"The monumentally silly idea-and not a new one, either is mashing up...rock warhorses with classical music warhorses...The result is both are coarsely cheapened...Most of the blame has to be placed on Fleischer, who carpentered the bloated arrangements and who conducts them for maximum deafening results...Everything is amplified, including, the assaulted arias...Everything from start to finish is obstreperous."
Read more

"The earnest spectacle, the overstated reverence...It knows its audience, and it serves them honestly and without cynicism...Co-creators Evan and Fleischer, respectively featured onstage as vocalist and 'maestro', have not cooked up some cockeyed plot or artist hagiography as an excuse to string together a series of familiar tunes. This is not a jukebox musical but a concert, and as such it can cater unabashedly to baby-boomer nostalgia."
Read more