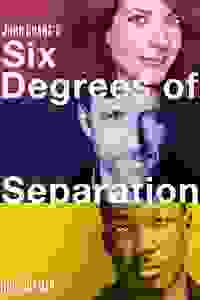 Inspired by a true story, this play follows the trail of Paul, a mysterious young con man who insinuates himself into the lives of a wealthy New York couple, claiming he’s the son of actor Sidney Poitier. After a shocking surprise, the couple tries to piece together the connections that brought him into their world.

See it if good acting, good sets very moving at some points.

Don't see it if can get slow, get away from plot at times.

Don't see it if you find it grating to have college kids played as screeching brats. Or you hate waste: huge 18-actors w/ most lines spoken by 3 of them. Read more

See it if you enjoy very intelligent drama with excellent acting. Simple but effective set. I saw the original show and didn't like it. Loved this one

Don't see it if you enjoy comedy. The story centers around a very disturbed young man who cons people. Read more

See it if you want to see some solid acting in a solid (if time-worn) dramedy that still has some bite and provokes some thought, albeit fleeting.

Don't see it if you saw the original Broadway production which seemed to be a bit edgier and more sympathetic and ethically ambivalent.

See it if you're looking for something meaty, but funny, and with Grade-A performances.

Don't see it if you dislike the style of writing where actions are described in dialogue rather than, well, acted. Some of the writing is a tad pompous.

See it if You want great acting and a story that holds your attention: you won't be bored. You enjoy satire.

Don't see it if You want a more contemporary play: despite this being a "newer" revival, 1990 is less relevant than you think(scary!).

See it if you enjoy social satire; you are a fan of Janney who does not disappoint and you enjoy good dialogue and writing.

Don't see it if For me, this lacks the poignancy, novelty and freshness of the original. The direction of the children is annoyingly over the top.

“An earthbound revival of Guare’s marvelous ‘Six Degrees of Separation’…Mr. Hawkins transforms a fatally mixed-up character into something close to a tragic hero…Ms. Janney is a highly credible Ouisa…The deception of the Kittredges and their society pals always had its farcical elements. But they have been heightened here at the expense of poignancy…It’s a tone that screeches as the play becomes darker, especially in the sequences involving Paul’s gulling of a naïve aspiring actor.”
Read more

“Yes, John Guare’s 1990 hit feels dated…And yet, it swings both ways. Guare’s elegant and elegiac social dramedy actually seems startlingly prophetic…Janney is a perfect Ouisa Kittredge: martini-dry and quick with a quip, almost undone by maternal instinct. Hickey flits amusingly about as her art-dealer and husband Flan…Trip Cullman directs with great panache...The cumulative effect, once you get over the retro vibe, is renewed respect for a disquieting, still-rewarding work.”
Read more

“At the edges, the play has been softened by time and by a production that gets a few things wrong. But at the core, especially in the character of Ouisa as now portrayed by the spectacular Allison Janney, it gets everything right...Cullman emphasizes the traditional theatrical elements as a way of comforting the audience when, I kept feeling, it ought to be afflicted…But even softened slightly as it is in this production, the play’s brutal message to sophisticates, comes through.”
Read more

“Cullman's razor-sharp staging serves as a welcome reminder of the fiercely intelligent, pungently funny voice of playwright John Guare at his vintage best…While two sensational performances occupy the play's molten center, the entire large ensemble that surrounds them is on fire. That heat is due in part to Cullman's whiplash pacing...But it also rises from the play itself…It remains a work of stinging satirical brilliance...Hugely entertaining, clever and provocative."
Read more

“A beautifully unsettling Broadway revival…It’s aged nearly as well as the ‘Cats’ quips—far better than you’d expect…There’s plenty of profundity as well…On the outside, Ouisa is polished and buffed and shined to perfection, but inside, she’s ‘a collage of unaccounted-for brush strokes.’ In an argument with Flan, she asks him this question—one that I suspect Guare wants us all to ask ourselves: ‘How much of your life can you account for?’ Three days later, I still don’t have my answer.”
Read more

“Despite the vitalizing presence of Allison Janney in director Trip Cullman’s elegant revival, ‘Six Degrees of Separation’ lacks the comic bite of the original production…Guare has a great ear for inane small talk, and his conversational dialogue is pitilessly funny…Hawkins is a total charmer who effortlessly inhabits Paul’s preppy persona…Janney’s wicked, smart delivery is perfect for Guare’s witty dialogue. But she’s also uncommonly sensitive to Ouisa’s desperate need for someone to care for.”
Read more

"Cullman’s staging is exemplary, but it’s the play itself that makes the deepest impression...One of the strongest American plays of the postwar era...Everyone acts with the high-keyed, anti-naturalistic histrionics that Mr. Guare favors, and the resulting unanimity of tone serves the play well...You’ll be struck by how fresh and immediate it feels. That’s a pretty good working definition of a classic, which binds past and present together in a web of permanent relevance."
Read more

“A spectacular revival…’Six Degrees’ transcends its particulars and addresses something ineffably human: The terrifying gulf between how we see ourselves and how we need others to see us. That’s a theme for the ages…Hickey brings a powerful sense of irony to Flan…Hawkins is brilliant…Janney is utter conviction in conveying the transformation Paul has unwittingly, unexpectedly brought about in her...It’s only gained in power over the last quarter-century.”
Read more