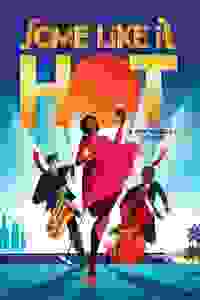 View in admin
Some Like It Hot (Broadway)
NYC: Midtown W
85
Buy tickets from $69 from the Box Office
Score it Scored!

Some Like It Hot (Broadway) NYC Reviews and Tickets

A new musical adaptation of the classic Hollywood film of the same name.

In Prohibition-era Chicago, two musicians must escape from the Windy City after witnessing a mob hit. With gangsters after them at every turn, they find safety as new members of the swingingest big band ever to tour the country.

Will they be able to keep out of harm's way without blowing their cover? Or could the mob, the truth, and maybe even romance finally catch up with them? Some Like It Hot is a new musical adaptation of one of Hollywood’s greatest classic comedies.

Directed and choreographed by Casey Nicholaw (The Book of Mormon), Some Like It Hot features a score by Marc Shaiman and Scott Wittman (Hairspray), and a book by Matthew López (The Inheritance) and Amber Ruffin (The Amber Ruffin Show).

See it if Good to see an uplifting show with threads of our contemporary times; Unfailing entertainment and singing that made me smile ear to ear.

Don't see it if You want something serious and/or don’t like musicals.

See it if you want a show that is fun and silly, has great choreo, wonderful singing, and sort of a message. Nothing heavy, just a fun musical comedy

Don't see it if you are looking for something profound.This is all about entertainment and fun.

See it if You love zany, clever, very witty musicals ! This one has everything ! The story is funny and the show is brilliantly staged and costumed.

Don't see it if There is nothing not to enjoy in this new, often hilarious musical !

See it if you want to see a crowd-pleasing, slick, all-stops-out musical that gives a classic movie an interesting twist.

See it if like old fashioned musicals - great dancing, sets, songs (all up-tempo). manage to update the dated plot to be relevant today.

Don't see it if want heavy drama. this is light stuff but fun. music sounds like from the period but not really any earworms.

See it if you are a fan of musical theater, as you will NOT BE DISAPPOINTED by this FUNNY and bright NEW musical!

Don't see it if a smart NEW musical based on the 1959 film of the same name doesn't appeal to you. Read more

See it if you want to see one of the better man-in-a-dress shows; the piece handles Daphne's gender journey better than expected

Don't see it if you think man-in-a-dress shows are transphobic; this is better than Tootsie or Mrs D, but it's still pretty reductive

"A long and delightful tap sequence midsong lets you know that Nicholaw is going to pummel you with pleasure before massaging you with message."
Read more

"What 'Some Like It Hot' lacks in depth, though, it makes up for in shinier musical-theater pleasures. You’ll leave this show with a smile on your face...There’s a whole lot to like."
Read more

"This new production knows it has to ultimately come back to the comedy. Even as a musical, the comedy comes first and everyone involved seems to understand that, making the entire show move like Jell-O on springs."
Read more

"Audiences looking for a sugary shot of old-fashioned Broadway hooch will probably find much to satisfy here, but for all the energy expended and the talent on display, 'Some Like It Hot' eventually begins to pall, all but numbing us to its charms by the relentlessness of its insistence upon them."
Read more

"Whatever reservations I have are far outweighed by the constant, good-natured energy, unflagging humor, and the show-stopping tap dancing that keeps everything moving at racetrack speed."
Read more

" 'Some Like It Hot' is a delight from start to finish."
Read more

"Screen-to-stage adaptations are always tricky endeavors, and this one scores points for not just tracing the source but turning up some fresh ideas of its own...No one leaves thirsty."
Read more