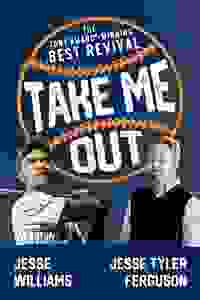 View in admin
Take Me Out (Broadway)
NYC: Midtown W
85
Score it Scored!

Take Me Out (Broadway) NYC Reviews and Tickets

Tony Award-winning play starring Jesse Williams and Jesse Tyler Ferguson about the ramifications of coming out as gay as a sportsman.

This 2003 Tony Award winner for Best Play is the story of a star athlete publicly coming to terms with his sexuality. Darren Lemming (Jesse Williams) is the star center fielder for the Empires, a professional baseball team. Against the warning of fellow teammates, he steps out of the closet, revealing a barrage of long-held, unspoken prejudices. Facing some hostile teammates and fraught friendships, Darren is forced to contend with the challenges of being a gay person of color within the confines of a classic American institution.

This production, directed by Scott Ellis ('Tootsie') received two Tony Awards, for Best Revival of a Play and Best Performance by an Actor in a Featured Role in a Play for Jesse Tyler Ferguson.

See it if you have the patience to weed through all the mindless fluff to the good bones of the story.

Don't see it if mindless rants useless to the story dilute the good plot ideas. Excruciating at points. Read more

See it if The story should be more streamlined. Good acting for the most part.

Don't see it if A shorter play more centralized.

See it if You are interested in baseball/sports or want to see male nudity. There are a couple really good scenes between a lot of boring filler.

Don't see it if Unless you have an interest in baseball you may find it slow & meandering. I found myself checking my watch and waiting for it to end.

See it if You like smart, relevant plays that take a topic you think you know and turn it around so you see that indeed there are more than two sides.

Don't see it if You’re homophobic or looking for something light and fluffy…this definitely is not a feel good musical. This is a think a lot play.

Don't see it if you want a good ending. The threads are lost and tangled. Superficial treatment of profound issues. Memory play sputters out. Disappointing.

See it if you want to see how multiple messages in an award-winning play from two decades ago are still very relevant. Light humor and good direction.

Don't see it if intense interactions over race and sexual orientation are disturbing for you.

See it if Such amazing performances from everyone in the cast. I was entranced the whole time.

Don't see it if You don't like nudity or baseball

See it if you enjoy gay plots, baseball, any of the stars, and full male nudity on stage, clever writing, dramatic plot twists, friendship among men

"It’s not the kind of work that benefits much from postgame analysis, which reveals flaws in construction and logic. But in performance, now no less than in 2002...it is mostly delightful and provocative. Perhaps especially for gay men, it is also a useful corrective to the feeling of banishment from a necessary sport...But as Lemming and Marzac form a bond — not romantic but not untender, either — the ideas that Greenberg is juggling, about integration on the ball field and integration of the psyche, fully pay off."
Read more

"Under Scott Ellis’s direction, the clownish characters go extremely silly and broad: the Spanish-speaking ballplayers in particular ask for easy (and ugly) laughs...Ferguson as Mason breathes in the smell of the grass at the stadium, and his face transforms, blissing out, starting to shine. He does a lovely job with the role, and Greenberg’s lyricism is at its strongest in his scenes, but he’s playing against a ghost runner...Luckily, there is Dirden. He appears in only two scenes, rolling into them with a low-rider gait that establishes his dominance over the others."
Read more

"The play’s resonance goes beyond the enduring invisibility of gay men in pro baseball; it hits harder in a post-Trump America where homophobes, racists, white supremacists and other bigots have been emboldened to own their toxic prejudices...Director Ellis expertly navigates the play’s shifting moods...Ellis digs into the more sobering developments with equal skill, and his experience with musicals gives him a nimble grasp of the tricky rhythms of Greenberg’s loquacious dialogue. His sharp eye for casting helps him coax incisive performances from a terrific ensemble without a weak link."
Read more

"You might not be familiar with the ins and outs of the sport, but it'll be hard to walk out of the Helen Hayes Theater after two hours and fifteen minutes without caring about the story you just watched unfold onstage...The production team's minimalistic approach to set design smartly serves to elevate and highlight the strong performances of 'Take Me Out,' acknowledging that this is the kind of play whose success and engagement hinges on sharp, nuanced relationships and emotions between the eight racially diverse cast members."
Read more

"Directed by Scott Ellis, this revival, too, is a solid hit, despite a few grounding errors...Despite some new tweaks, Greenberg’s ambitious script still has a pile-on of themes, dealing with gender, race, sexuality, celebrity and spirituality, not to mention major league sports. But the playwright and this production still manage to bring it home in the play’s ninth inning with a graceful, bittersweet denouement that leaves characters still searching, still discovering and still in play for another season."
Read more

"Mr. Ellis, a veteran Broadway director here at the top of his form, has in fact fielded an entirely terrific all-male cast, almost a dozen actors who, as with the best pro sports teams, work smoothly together even as they shine individually."
Read more

"Scott Ellis’ grounded staging spotlights and underlines the conflicting emotional subtexts in Richard Greenberg’s profound script, in a production of Take Me Out that is an alternately tense, funny, and heartrending toast to America’s favorite pastime."
Read more