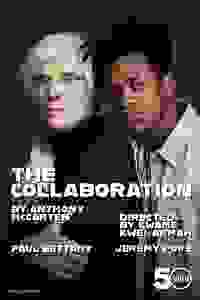 View in admin
The Collaboration (Broadway)
NYC: Midtown W
79
Buy tickets from $69 from the Box Office
Score it Scored!

In 1984 New York City, Andy Warhol’s light is fading. The wunderkind of the modern art scene, Jean-Michel Basquiat, agrees to collaborate with Warhol on a new exhibition, which soon becomes the talk of the city. Based on a true story, the two artists embark on an artistic and personal journey that redefines both of their worlds.

Direct from a hit run in London's West End, Paul Bettany ('WandaVision,' 'The Avengers') and Jeremy Pope ('Choir Boy,' 'Ain't Too Proud') reprise their roles for this Broadway production.

See it if you are interested in one of the protagonists. Absorbing story. Bettany is excellent.

Don't see it if Pope is not right for the role. In an attempt to emulate the original he comes out forced and overly effeminate especially on the first act.

See it if If you have an interest in art or Warhol & Basquiat you will prob appreciate this show more than others.

Don't see it if Felt a little too long and slow. Should have been a one act at 90min.

See it if For strong acting and interesting talk abt life/art, w bio detail. A bit draggy, but mostly smart. Relevant stories of police brutality.

Don't see it if you want light entertainmt. Altho dialogue has wit, mostly weighty themes. Sometimes clunky. Too long. Repetitive. I was glad I saw it.

See it if you’re a lover of art and open to different perspectives on art, or are interested in plays about recent historic figures.

Don't see it if … I’m actually struggling to come up with a reason not to see this.

See it if you want to see 2 fine actors duel it out. They are incredible.The story is fascinating.I didn't now about their friendship.

Don't see it if you only like big flashy musicals.This is a good show that has something to say about friendship and tolerance.

See it if you would enjoy a dual character study of the relationship between Warhol and Basquiat anchored by great turns from Bettany and Pope.

Don't see it if you won’t watch plays:

“ 'The Collaboration' moves through a fairly sluggish first act toward a more compelling conclusion...in the less didactic second act the play brings us into a believable intimacy with the growing friendship and grudging respect between the two artists."
Read more

The pairing of art-world bad boys might seem to promise some dramatic fireworks, or at least some gossipy fun, but this vehicle lacks a dramatic motor. The Collaboration is a high-concept pitch in search of a rationale
Read more

While Bettany and Pope are each very convincing as Warhol and Basquiat since they are made up to look exactly like they did in life, they seem to be in two different plays, using different acting styles. The other problem with "The Collaboration" is that it feels very superficial, like a laundry list of items for them to discuss, while at least several of the dramatic devices are taken out of context or are relocated in chronology.
Read more

"The economy and focus of the script has provided the principal actors more than enough to shine in their roles...Indeed, the entire production pulsates with color, vitality, and feeling."
Read more

"Pope and Bethany look the parts but the script isn't compelling enough. By the end, the viewer learns about the work and the relationship between the two, but I’m not sure how much I cared."
Read more

The play has its share of sturm und drang, especially toward the end when the artists engage in an aria-like confrontation that’s the equivalent of the 11 o’clock number in a Broadway musical; however, for much of its two hours it marks time with discussions and debates over each man’s artistic theories and relationship to the commercialization of their work. With so much reliance on theoretical point and counterpoint, no matter how passionately expressed, the tension is usually more cerebral than otherwise.
Read more

"Onstage, though, 'The Collaboration' feels emptily formulaic...It doesn’t bring us any insight into whatever closeness Warhol and Basquiat had."
Read more

"The play imagines what they might have been like behind the masks they fashioned for the public, but rarely gets far beyond the surface."
Read more