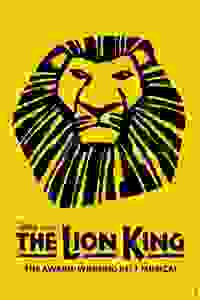 Puppets and live actors create a magical world to tell the story of Simba's rise to the throne.

The worldwide sensation and winner of six Tony Awards, including Best Musical, Best Direction and Best Costumes by Julie Taymor, is based on the beloved 1994 animated Disney movie. Simba will someday inherit the throne of the Pridelands, but he isn't quite ready. When his devious Uncle Scar murders King Mufasa, Simba flees to escape his guilt. Time and new friends keep Simba company until his past comes back to remind him of his rightful place.

The music is by international superstar Elton John with lyrics by Tim Rice. The score includes 'Can You Feel The Love Tonight' and 'Circle of Life.'

The musical is the third-longest-running show on Broadway and is notable for director Julie Taymor's concept which incorporates puppets to bring the animals to life.

See it if Brilliantly staged. Beautiful music. A classic.

Don't see it if You don't like moral lessons wrapped in childish themes.

Don't see it if if you don't like a great feel good story. Music and dancing are incredible.

See it if You have children and enjoy big disney productions.

Don't see it if You are expecting anything different from the movie.

See it if You want to see a real piece of art. A true masterpiece.

Don't see it if You just can't get into a kids show no matter how artistically it has been interpreted.

See it if you have a child to take to the theater. The staging is innovative, the performances strong, the production polished.

Don't see it if you want a strong script. This show is the movie verbatim, which was never very insightful. It was written for children.

See it if you enjoy great music and choreography with spectacular costumes.

Don't see it if you are stuffy.

See it if you just want to have fun!

See it if enjoy stagecraft. The opening is the most amazing piece of staging I have ever seen. True to the movie which means it is great for kids.

Don't see it if if too much cute makes you gag. Appreciating the plot depends on your willingness to accept the excessive cute factor.

"You can only marvel at the exotic procession of animals before you: the giraffes and the elephants and the hippopotamuses and all those birds in balletic flight. These are creatures of air and light and even a touch of divinity. Where are you, really, anyway? Somehow you have fallen into what appears to be a primal paradise. Such is the transporting magic wrought by the opening 10 minutes of ''The Lion King.''"
Read more

"Taymor populates the stage with an amazing menagerie of beasts; her audacious staging expands a simple cub into the pride of Broadway, not merely a fable of heredity but a celebration of heritage."
Read more

"You will be bombarded by some of the most beautiful and spectacular sights theater can offer from before and behind, so eyes in the back of the head will come in handy.
Read more

"'The Lion King' was astonishing, in the jaw-dropping manner of speaking. And today, 21 years later, it still is...Taymor, the avant-garde director to whom Disney entrusted the piece, outdid herself...Everything still looks wonderful, and looks practically brand new, too. One of the stunning elements for me, this time through, was the realization of how brilliantly this show moves...The hard-working ensemble is well-drilled and exceptional."
Read more

"It’s Julie Taymor’s puppetry that continues to astound...The problem is that the rest of the musical is not as good as Taymor’s vision for the animals and their gorgeous ensemble numbers...Now, the beauty is there, but the show feels a bit worn...The few big numbers aside, much of the John-Rice score is middling ’90s pop rock...That said, the performances, even now, are rather lovely...But you’re not here for the performances. You’re here for the puppets. And they’re worth it."
Read more

"The Lion King is a spectacular rendition of the animated film, a brilliant theatrical adaptation that stands on its own...Taymor has risen to the challenge, translating the physically complex tale to the stage with an endlessly clever, visually stunning use of masks, puppetry, costumes and scenic effects; the stage show has the delighted audience firmly in its grip."
Read more

"A stunning stage event. Combining a graceful horde of actors, singers and dancers with a stylized world of fantastic puppets and theatrical wonderment."
Read more

"The opening scene unfolds with moment after giddy moment of astonishment. South African choral harmonies, with their calming and yet exuberant rhythms of attack and release, seem to come from everywhere in the darkness. A magical rich jungle parade."
Read more

"The Lion King" on Broadway: Everything you Need to Know
Learn everything you need to know about &quot;The Lion King&quot; at Show-Score, from cast to plot, to what made the show unique and successful. Read more
Featured Member Reviews: Family Friendly Edition
Every Tuesday and Friday, we're turning the spotlight on some of our &#13; favorite member reviews. Here are our picks for the week for family-friendly shows, such as &quot;Aladdin,&quot; &quot;The... Read more