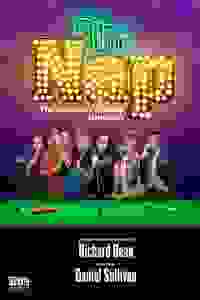 MTC presents a new comedy by the author of the rollicking, award-winning Broadway comedy 'One Man, Two Guvnors,' which offers a comic look at the world of snooker – the British version of pool.

Dylan Spokes, a fast-rising young star, arrives for a championship tournament only to be confronted by the authorities warning him of the repercussions of match fixing. Before he knows it, Dylan is forced into underhanded dealings with a cast of wildly colorful characters that include his ex-convict dad, saucy mum, quick-tongued manager, and a renowned gangster, to boot. It’s a fast-paced comedy thriller where, in an exciting twist, the tournament unfolds live on stage.

Don't see it if You don’t enjoy farce. You don’t like cheap humor. You want a more believable story. Accents are a bit confusing at first.

See it if Partner's 85% and my 75%. Some funny English humor. Good casting. Entering with a "What am I doing here" attitude helped

Don't see it if you are expecting a deep thought provoking production. . It is not what one would expect on Broadway.but the audience responded positively

See it if It's funny and enjoyable. Love that it a little story for fun.

Don't see it if If accents bother you. Humor is different for it may go over your head. Read more

See it if you enjoy sitcoms with happy endings. This show is light with a fun twist. Don't expect heavy drama.

Don't see it if you're looking for something really "theatrical." This production feels more like a TV sitcom than a play. No real spectacular elements.

See it if Amazing how a game like snooker worked so well on stage. Fun and amusing. There were some great lines.

Don't see it if Difficult at times to understand what was being said because of the British accents (the cast is American, but putting on those accents). Read more

See it if you want to have fun & some good laughs; enjoy watching a competitive sport from an all around terrific cast; you get a little of everything

Don't see it if you insist on comparing this play to One Man Two Guvnors - One Man will win out every time; you don't like farce and lots of silliness.

See it if you want to see a play that should never have crossed the pond from England to the U.S. Some really fine actors deserve so much better.

Don't see it if you have other plays on your Must-See List. Read more

"Delicious new comedy directed with an assured balance of blatancy and subtlety by Daniel Sullivan...Its success is achieved not by sustained assault but by dexterity, and by always keeping the other guy (in this case, the audience) off guard...The cast members shape their characters with just enough comic exaggeration to stay credible and also to suggest that not everyone is what she or he seems."
Read more

"Could these characters be funny, at least until the play takes an ugly, humor-killing turn at the end of Act I? Perhaps, yet most of them are not: Aside from Conlee and Moore, the actors offer comic characterizations that feel as put-on as their all-over-the-map accents. A sprinkling of cute one-liners and two live snooker sequences in the second act provide moments of relief from the forced plotting and even more forced romance, which converge in an inane finale."
Read more

"Bean’s very silly new comedy 'The Nap' probably takes the cake for Most British Thing on Broadway...A bouncy sports caper set in the world of high-stakes snooker...The play makes its personality clear right from the get-go...Personalities are the building blocks of Bean’s comedy, and there are plenty of big ones orbiting Dylan’s steady center...For Bean, the nap is a straight line to a good joke. He knows his game."
Read more

"Effortful delivery is just one issue with the wheezy direction of Daniel Sullivan, whose forte is definitely not this kind of snappy, suspenseful comedy, in which timing is everything...It's a testimony to the cheeky humor and ingenious plotting of this 2016 play that it remains agreeable entertainment despite less-than-ideal handling. The frequently hilarious one-liners help...Sullivan's direction lacks spark and fluidity, making the play feel overlong at two hours-plus."
Read more

"You don’t need to know much of anything about billiards to get hooked into this witty play from prolific playwright Richard Bean...Daniel Sullivan’s direction keeps the play moving briskly, and Schnetzer’s Dylan charms as the straight man at the center as this cart goes off the rails, but Billings is the one gleefully driving the train...In a smart twist, the game they’re playing is a real one, and either character may win or lose. But regardless of who gets the trophy, 'The Nap' is a charming winner."
Read more

"There’s something mysteriously appealing in entering the world of this pub-popular sport, here set in Sheffield, England, ground zero for snooker championships. Add high stakes, lowlifes and a wicked wit, and you’ve got a solid win...There’s in-the-moment drama as the audience follows on large overhead projections as the game is played, with tensions broken by the laughs derived from the hush-speaking commentators."
Read more

"Relentlessly, incapacitatingly unfunny from start to finish. The cast, Daniel Sullivan’s direction and David Rockwell’s quick-change set are all impressive, but who cares? Except during the climactic snooker match, which is full of well-staged cue-and-ball slapstick, I didn’t laugh even once. Instead, I sat silently in my aisle seat, praying for 'The Nap' to end. Don’t let that happen to you."
Read more

"No offense to Snooker fans here, there or anywhere, but a comedy built around the game’s intricacies and milieu is bound to lose some bite when rules need more set-up than jokes...Hopes of Martin McDonagh creep back in, but are dashed entirely when a big reveal – that won’t be spoiled here – surprises us mostly by its hoariness. Until the play really lets them down, most of the cast keeps pace with the various ruses."
Read more