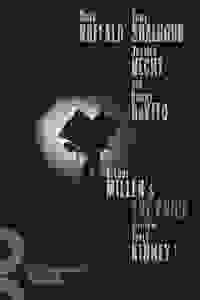 When the Great Depression cost his family their fortune, Victor Franz gave up his dream of an education to support his father. Three decades later, Victor has returned to his childhood home to sell the remainder of his parents’ estate. His wife, his estranged brother, and the wily furniture dealer hired to appraise their possessions all arrive with their own agendas, forcing Victor to confront a question, long-stifled, about the value of his sacrifice. Steppenwolf Theatre Company co-founder and Tony-nominated actor Terry Kinney directs.

See it if you like Miller's small focus on a family illuminating greater truths. Act I is fairly light, Act II ponderous. The furniture overwhelms.

Don't see it if you want clear answers to interesting questions. DeVito is funny, Ruffalo disappoints, others are fine. Not Miller's best, but worth seeing.

See it if you like Arthur Miller. Ruffalo was so so at best , DeVito good, Shaloub very good. It was not as good as when I saw it in the 80 s.

Don't see it if If you do not like Miller or a deep ,penetrating story like this.

Don't see it if You don't want to think twice about each character's motivations. The stage and theater felt too large for this family drama. Read more

See it if you're an Arthur Miller fan, like great acting by Ruffalo, enjoy family issue plays, like quirky characters,

Don't see it if you expect top notch Miller, you don't like plays that go in irrelevant directions, have too many off stage plot twists, too much talking

See it if great acting by all four. Miller can do no wrong in my eyes.. first noticed similarly by Ruffalo to Marlon Brnado

Don't see it if I liked the set better in Roundabout's previous production at the Criterion site.

See it if You enjoy classic Americana Arthur Miller dramas performed by some of our best stage actors.

Don't see it if A play about quashed dreams and quarrels about dividing a family's estate would hit too close to home.

See it if you're a fan of Arthur Miller's or any of this show's fine actors, or if you're into family dramas.

Don't see it if heavy dialogue and little movement on stage bothers you. Unless you're truly captivated by the dialogue, it's easy to tune it out.

"Sympathetically directed and ardently acted, there’s much to enjoy in this Roundabout Theater Company revival...Yet it shows 'The Price' as a smaller, more stolid work than it wants to be — still just a little out of style...Mr. Kinney’s quieter, more faithful style emphasizes the fine roles for actors but doesn’t make a strong case for the play itself...If the debate is involving, it’s not especially consequential."
Read more

"It requires a level of focus that Roundabout Theatre Company’s production, directed by Terry Kinney, only sometimes delivers...The play winds up in the pocket of Danny DeVito, making his Broadway debut as a charming old ganef of a furniture dealer...After dominating the first act, DeVito mostly disappears for the second, and the revival’s energy flags without him. Only when he’s onstage does 'The Price' seem right."
Read more

"Gripping if slightly muddy revival...'The Price' doesn’t so much advance as turn like a screw, deeper and deeper into the soft wood of memory...The actors, though already powerful and moving, sometimes look as if they need more time to figure out where they are...You’d think that a play so wordy and rangy would be unwelcome in today’s theatrical environment, which favors large, uncomplicated, single-minded action. But that’s why it’s so much needed."
Read more

"Kinney doesn’t so much direct here as organize traffic, and most of the show takes place in a bottleneck: one watches listlessly because the script doesn’t seem to matter much to the actors, or, when it does, they’re using it to their own aims, as in the case of DeVito. Ruffalo is dead on his feet, and Hecht, ever needy, feels entirely lost. It’s as if she and Shalhoub, whose insinuating sexiness fails him in this role, are waiting for the show to be over."
Read more

"Bolstered by a first-rate cast, director Terry Kinney's carefully considered production shapes all sides of the arguments into compelling drama...The writing is far from black and white on either side...However, in the fractious second act, Miller's play shows its dramaturgical weaknesses, becoming circuitous and repetitive...Still, the strong cast ensures that the drama remains riveting...A very solid, sensitively directed production of a flawed but rewarding play."
Read more

"His unforgettable performance in Arthur Miller’s 'The Price' is a serious reminder that DeVito belongs in the pantheon of greats. His supporting role completely steals the spotlight in this wobbly revival...Shalhoub succeeds most at suggesting a real life behind Miller’s verbal firecrackers. Ruffalo, flat and terribly miscast as a schlub...The playwright’s big mistake was in focusing the material on three other dullard characters when Solomon is obviously such an original creation."
Read more

"Still reverberates with meaning for the 2010s. Let’s just say that the dramatic themes and human conflicts are timeless. Kinney directs a superlative cast consisting of Ruffalo, Shalhoub, Hecht, and DeVito, who make this revival a treasured experience...Under Kinney’s measured direction, the recriminations really heat up in the galvanic second act, when kind Esther and adorable Solomon fade into the shadows and let the brothers fight their old quarrels until one or both of them falls over."
Read more

"Miller’s best play—the only one, in my opinion, that is totally successful as a work of theatrical art...The highly charged naturalism of Ruffalo’s acting is terrifically impressive...Shalhoub leaves nothing to be desired...On the debit side, DeVito is effective enough in an obvious way, but he’s using Solomon as a star turn...This revival isn’t perfect, but it works—the play comes through clearly and strongly—and Ruffalo and Shalhoub are more than good enough to offset its forgivable flaws."
Read more