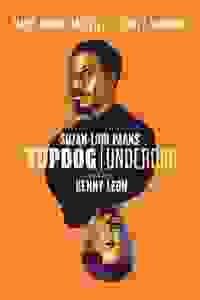 Topdog/Underdog is the story of two brothers: Lincoln and Booth, both given their names as a joke  by their father.

Troubled by the past and their fixation on three-card monte, the brothers begin to unravel the true nature of their history.

See it if A well acted play for the most part. Play goes in to many directions.

Don't see it if If loud hip hop music before the show bothers you. If you want a real solid storyline.

See it if Witty, energetic dialog, plot twists, and character acting kept me riveted to what was going to happen to these two brothers.

Don't see it if You don't want to get drawn into a codependent relationship with a dangerous flaw.

See it if You love well-written, Pulitzer-winning family plays with two top performers. This is a career-making performance for Hawkins.

Don't see it if You dislike small, one-set, two-actor plays.

See it if You like a mix of funny and sad in your story telling; predictable in an unpredictable way; Excellent acting & differences between brothers.

Don't see it if U cannot relate to people f/different backgrounds than yours and you dislike tension & sexist or "foul" language; the play is not for Read more

83
Great staging, Great acting, Predictable, Should be one act, Too long

See it if you want to see two brilliant actors working well and trusting each other on stage together.

Don't see it if You are looking for a big Broadway spectacular. This is two actors on stage together with only one set. Read more

See it if you like good theatre.This play has a lot to say about racism,family,relationships.The writing is excellent, as is the acting.

Don't see it if all you want is fluff.This show is very, very funny at times, but is is basically a drama.I really think everyone should see it.Excellent.

See it if You want to see a brilliantly funny perfectly acted and staged human comedy/drama about 2 clever New York street characters.

Don't see it if You can’t tolerate raw often sexist language. You have no interest in the lives of these street characters. Loud rap music is not your thing

See it if enjoy well-acted two-handers. drama with an undercurrent througout.

Don't see it if want fluff.

"This “Topdog/Underdog” is never in danger of being dragged down...The ending loses none of its explosive shock even if we’ve understood from the start that the odds in a hustle are always with the house."
Read more

"Superlative acting is at the core of the experience...Together, these two performers keep you guessing even as the play moves inexorably toward an outcome that has been in the cards all along."
Read more

"Afro-pessimism isn’t a genre in which I’d usually place Parks, let alone Leon. But played without winking in a key of aggrieved, stressed-out toxic masculinity, as it is here, 'Topdog/Underdog' is able to hit that note convincingly."
Read more

"The confidence radiating from both [Lincoln and Booth] performances keeps 'Topdog/Underdog,' a play with a winking eagerness to elude meaning, light, electric and most of all funny."
Read more

" 'Top Dog/Underdog' is not a subtle play...If it were subtle, it would not be as watchable, or entertaining. And for a play that's just two characters monologuing or arguing, while dealing with some heavy issues — race, class, trauma, murder — Top Dog is pretty damn funny."
Read more

"The first Broadway revival...crackles like a live wire — an American fable with its finger shoved in a socket. Throw in career-high performances from Corey Hawkins and Yahya Abdul-Mateen II, and it is a theatrical event in the most essential sense, in that it demands to be seen here and now."
Read more

"The characters’ passive complicity in their fates, and the play’s ultimate descent into violence, feels both simplistic and sensationalized. 'Topdog/Underdog' seems sadly retrograde."
Read more

"Twenty years after it first arrived to shake up a complacent Broadway and make a Pulitzer Prize winner of its author Suzan-Lori Parks, 'Topdog/Underdog' has lost none of its vitality and power and cunning."
Read more