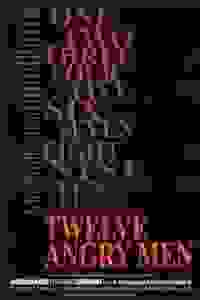 Twelve jurors are brought together to decide a young man’s fate. Eleven of them agree but there is one lone dissenter, who throws the courtroom into a whirlwind of emotions.

A young delinquent awaits sentencing for the manslaughter of his aggressive father. Twelve jurors are corralled in a room for their deliberations in a murder trial. One juror feels that there is a 'reasonable doubt' — to the frustration of his 11 colleagues — thereby preventing a quick verdict. During the heated debate, the hidden preconceptions and assumptions of the jurors are revealed. When faced with playing the hangman, each juror is forced to face himself.

See it if You want to see one of the most finely crafted American dramas.

Don't see it if You can't stand courtroom dramas.

See it if You want classic theatre with a great ensemble. Pulls you forward all the way through.

Don't see it if You don't like intense, straight plays.

See it if A very solid production of a chestnut of a thriller.

Don't see it if You don't care for classic, sturdy, plot-driven court drama.

See it if You believe the show's message and examination of prejudice and group-think is just as relevant today as when it first came out.

See it if you love courtroom dramas, talky plays, and a real moral quandary to sink your teeth into.

Don't see it if you exclusively like plays and musicals that are more about entertainment and less about grappling with real tough societal issues.

Don't see it if None

Don't see it if You enjoy grand plays and are expecting to be wowed. This is a simple but thought provoking play

See it if You are interested in more serious and intense pieces or if you are into court room drama.