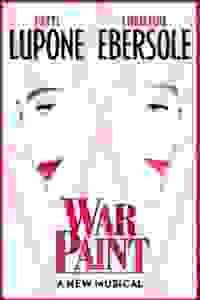 Brilliant innovators with humble roots, both women were masters of self-invention who sacrificed everything to become the country's first major female entrepreneurs. They were also fierce competitors whose 50-year tug-of-war would give birth to an industry. From Fifth Avenue society to the halls of Congress, their remarkable rivalry was ruthless, relentless, and legendary—pushing both women to build international empires in a world dominated by men. Costarring Tony nominees John Dossett and Douglas Sills, and directed by Tony nominee Michael Greif.

See it if You want to see two legends on stage

See it if you want to see Patti & Christine, still at the top of their game.

Don't see it if you expect any dramatic arc, compelling narrative or campy fun. There's no story, so there was no reason for this musical to be written. Read more

74
A treat to see double divas, but uninspired vehicle

See it if who wouldn't want to see combo of formidable Lupone and Ebersole in leading roles?

Don't see it if feels that you were seeing an "old" revival; predictable; mawkish ending; forgettable songs Read more

Don't see it if you have trouble understanding accents. I had real trouble with Lupone's accent in the first act. Chrisine was very easy to understand.

See it if You love the two stars, or would like to see a female-empowerment musical for adults (that isn't Wicked).

Don't see it if You think this will be like a musical version of "Feud". It's not campy, and the story and music never truly excite.

See it if Lupone/Ebersole go together like peaches and cream. Interesting story of the Rubinstein/Arden rivalry and women at the top of their game.

Don't see it if Unlike the talent, the score is not memorable. As the two women did not mingle in reality, there was little interaction between the leads.

See it if you love LuPone & Ebersole.I do, and it was worth going just to see & hear them. But the play meanders, doesn't tell enough of the story.

Don't see it if you are expecting a fully fleshed out story.This isn't Evita or Grey Gardens. Brilliant performances, but no book.We get hints about them.

81
Don't miss the two divas together

See it if I waited until it was almost closed, but am I glad I saw War Paint. Their voices are both splendid but very different.

Don't see it if Both have charisma for days The same creative team as Grey Gardens, but the score and story are not as strong. A master class in stardom, Read more

“Ms. Ebersole and Ms. LuPone go a great distance in disguising the show’s essential sameness. Ms. LuPone is as imposing as Rubinstein must have been, and presumably a whole lot funnier. Ms. Ebersole is equally formidable in a lighter vein. And Frankel and Korie have written numbers for their stars that cannily play to their separate but equal strengths…So, though my eyes occasionally glazed seeing ‘War Paint,’ I wouldn’t have missed it, if only to hear its leading ladies’ climactic ballads.”
Read more

"There are two excellent reasons to see 'War Paint,' and their names are above the title...Otherwise, much of 'War Paint' is a blur. It has been crafted with intelligence and care by the team behind 2006’s poignant 'Grey Gardens'...Michael Greif's direction keeps it moving efficiently along. But the show doesn’t make a persuasive case that its stories must be told...'War Paint’s' nails, though attractively polished, only scratch its surface."
Read more

"Beguiling but frustrating...For all the intelligence, sophistication, and sheer talent involved — LuPone and Ebersole are in top form — 'War Paint' keeps falling between an older model of storytelling and a new one, never fully climbing its way out of the gap...The structure quickly becomes a bit monotonous...Why, onstage, despite a perfectly smooth staging from Michael Greif, should 'War Paint' feel so effortful, like getting through an overheavy meal?"
Read more

"The marquee draw is the dynamite pairing of Patti LuPone and Christine Ebersole, Broadway's finest, in richly distinctive roles that play to their respective strengths...Their contrasting turns here are simply mesmerizing...Despite its relatively low-key dramatic engine, this is a smart, sophisticated exploration of two uncompromising...Some no doubt will find the show lacking in dramatic momentum or explosive conflicts. I found it thoroughly compelling and masterfully entertaining throughout."
Read more

"Ebersole and LuPone are nothing short of flawless...Add a heaping pile of beauty, glamour and lush costumes to the mix, and you have yourself a juicy — albeit highly elegant — drama...The music is strong but not particularly memorable...But the lyrics are impactful...While Act 2 slows a tad the show is overall well-paced, due in part to the quippy one-liners that could easily be on the packaging of a compact...'War Paint' isn’t perfect, but it’s a thing of beauty for sure."
Read more

"Luckily, there’s not much plot to distract from these carefully nuanced characters, their amazing careers and dazzling wardrobes...The music feels right for both the individual characters and the progressive time frames. The lyrics suit the characters and serve the plot. And the book is smart and literate...While much is made of their fierce competitive practices, there’s little at stake here, aside from the loyalties of their male partners."
Read more

"The stars are starry, the sets are glossy, and the book is full of snappy one-liners. In the end, though, 'War Paint' fails to keep its costly promises...The plot fails to pass the who-cares test...Structurally rigid, dramaturgically overcrowded and emotionally tepid... LuPone and Ebersole are as good as you’d expect, Greif’s staging and the choreography are smooth and polished. In short, it looks like a winner—but as anyone in the cosmetics business can tell you, appearances are deceiving."
Read more

"You will be charged, thrilled and fascinated by two divas dishing it out with every trick in their careers of sharp, dagger-edged perfection as they command and hold the stage...There are songs galore but few of them will live in your heart after the final curtain. Blander than I expected and oddly lacking in rhapsodic melodies...The tunes in 'War Paint' do inspire you to go away humming. This does not, I must add, detract from the mega-watt voltage from the two divas onstage."
Read more