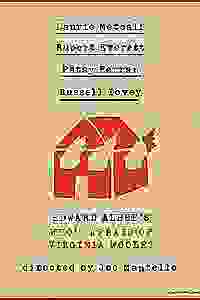 Metcalf and Rupert Everett return to Broadway in a new production of Edward Albee's classic drama of marital strife, directed by Joe Mantello.

In 1962, when Who’s Afraid of Virginia Woolf? stunned its very first Broadway audiences with its radical, provocative, and unflinching portrait of a marriage, Edward Albee instantly became the most important American playwright of his generation. The New York Times exclaimed that the new work “towers over the common run of contemporary plays.” At that season’s Tony Awards ceremony, the production racked up five wins, including Best Play and lead acting prizes for its two stars: Uta Hagen and Arthur Hill. Next spring, a new company of theatrical powerhouses take on this landmark drama nearly sixty years after its legendary Broadway premiere.

See it if it ever returns. Brilliant show.

Don't see it if you dislike family dysfunction.

See it if you love a slight twist on a classic that doesn't ruin the original material.

Don't see it if You want straight comedy. This is dark!

See it if You are looking for a masterful piece of the depressing reality of human decline.

Don't see it if You are triggered by substance abuse or are looking for a pick-me-up.

See it if This was a brilliant production

Don't see it if I can't think of a reason why not to. It was a brilliant production

See it if Great acting, sets and lighting. One of Albees best. If you like deep, dark plots.

Don't see it if Not an upbeat play. Could be depressing for some. If you want a comedy.

See it if you enjoy stellar, demanding, performances by great actors, at a 60's based university, on a good set with excellent lighting and costumes.

Don't see it if Not a lick of chemistry glue cementing them;but that fills more spaces of a wider playground to exercise mind games for weary, snozzled duo

See it if You’ve never seen this play before — it’s definitely a solid production — or want to see Metcalf at the absolute top of her game.

Don't see it if You’ve seen this play countless times and are no longer thrilled by it. Only when Metcalf is on stage does this production excite.