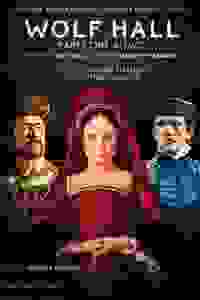 Thomas Cromwell is a lawyer, family man and master politician, with a unique talent for courtly intrigue. He sees his rise as the right-hand man of Cardinal Wolsey. But managing to sidestep the other man's fall from grace is just the beginning for his personal agenda, which will take him into the very heart of power as adviser to Henry VIII and change the course of British history forever. These twisting and darkly comic show is a heady rumination on ambition, revenge and power.

See it if you like historical and period pieces. Superb acting. Riveting even though you know the ending.

Don't see it if don;t like slower paced shows

See it if You are a fan of period pieces and the subject matter.

Don't see it if You aren't too familiar with the subject matter, at times it can be hard to follow and slow.

See it if you love Masterpiece Theater. WH has a majesty, but it wasn't engrossing. Prior historical knowledge was necessary, given the large cast.

Don't see it if you demand great performances. BMiles was disappointing as Cromwell. Direction was stiff. The six hour investment didn't yield the payoff. Read more

See it if You're very interested in British royalty and politics from earlier eras.

Don't see it if You can't stand history plays.

See it if the thought of who gets to define religion and why is fascinating to you (Part 1 in particular).

Don't see it if 5 hours of a play is overwhelming to you.

See it if you're a Britphile, like the more boring offerings of Masterpiece Theatre, have 6 hours to kill, or have a massive crush on Nathaniel Parker

Don't see it if any of the above doesn't describe you.

See it if you enjoy the Tutor period and masterful acting

Don't see it if you want a modern play; both parts on one day is a lot for anyone

See it if you enjoy excellent Shakespeare productions

"For the tastiest dish in town, you need to visit the Tudors of 'Wolf Hall,' the riveting two-part theater drama...The stage version is strictly for fun. That may sound like a weak recommendation to those who wear their brows high. But being fun in period costume for nearly five-and-a-half hours of live theater is no mean achievement. This was my third visit to 'Wolf Hall' and I found myself just as much in its thrall, and even more admiring of its accomplishment."
Read more

"The Royal Shakespeare Company’s triumphant, blockbuster adaptation of Hilary Mantel’s Tudor-history novels...as much as the fact-crammed pageantry of 'Wolf Hall' maintains admirable clarity and pacing, it often lacks the sudden burst of lyricism or philosophical depth you find in the Bard. I’d have taken more poetry over plot... Still, as a fast-paced political thriller, it is fiendishly engaging."
Read more

"Part 1 begins with a dance: a court entertainment that introduces some of the major players and themes. The ensuing drama, directed by Jeremy Herrin as tautly as possible, is interspersed with jousts, hunts, investitures, pantos, and — especially in part two — executions...For all its insights, this is not the kind of play that offers much psychology...The stage production is more of a pageant, visually beautiful but a little flat...mostly what we have is an extremely elegant Tudor soap opera."
Read more

"Majestic in scope if slightly reductive in execution...While it might fall short of the pantheon of all-time great stage events, 'Wolf Hall' is nonetheless an impressive feat, a compelling drama played out across the canvas of a nation soaked in rain and mud and blood...This version might be simplified and light on psychology, it's accessible and consistently engrossing."
Read more

"It’s worth every minute...The Royal Shakespeare Company’s outstanding production does justice to the revered Hilary Mantel novels while also offering its own intriguing spin on the oft-retold historical drama...'Wolf Hall' is remarkably efficient in streamlining the Mantel novels down to their most exciting essence, making the play’s pace seem much swifter than six hours. The immensely talented actors manage to make every backroom deal, courtier spat, and royal tantrum fully enjoyable."
Read more

"I haven’t read either of the much-praised novels, nor am I a scholar of 16th-century England. I can, however, assure you that Mr. Poulton’s 51/2 -hour stage version of “Wolf Hall,” is competent but dullish, a procession of short, choppy scenes in which nobody ever says anything more memorable than “Bring up the bodies!” The acting is as devoid of sparkle as the script...“Wolf Hall” is not without merit...But stick it out to the end and you’ll likely wish you’d rented “A Man for All Seasons” instead."
Read more

"The bad news is that the two plays that make up “Wolf Hall” will set you back six hours. Even worse is that they feel even longer. It’s amazing that a story jampacked with lust, betrayal, greed and violence can be so...dull. As well-acted, grandly staged and beautifully lit as it is, the show still manages to be tedious...That said, director Jeremy Herrin’s production looks smashing, especially the vast, mostly empty stage, framed by giant, brutalist-style concrete walls."
Read more