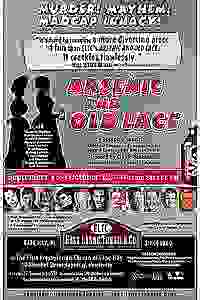 View in admin
Arsenic and Old Lace
NJ: Cape May
Score it Scored!

Murder! Mayhem! Madcap fun! This side-splitting comedy broke all East Lynne Theater Company’s box office records in 2018, and returns by popular demand! “It’s hard to imagine a more diverting piece of summer fun than Gayle Stahlhuth’s revival of “Arsenic and Old Lace” at ELTC. It crackles flawlessly,” wrote Terry Teachout in his review for “The Wall Street Journal” last summer. The 1941 comedy by Joseph Kesselring is about two sisters who populate their cellar with “acceptable” lodgers. One of their nephews thinks he’s Teddy Roosevelt, another is running away from the law, and the third is a theater critic who just wants to get married.