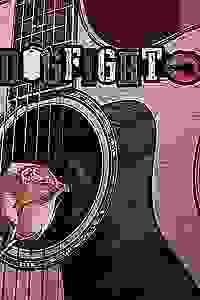 Eagle Theatre presents Pasek and Paul's ("Dear Evan Hansen") compassionate musical, which centers around a young marine and the idealistic waitress he enlists to win a cruel bet with his fellow recruits.

Compassion takes center stage in this beautifully romantic and hauntingly heartbreaking musical. It’s November 21, 1963. On the eve of their deployment to a small but growing conflict in Southeast Asia, three young Marines set out for one final boys’ night of debauchery, partying, and maybe a little bit of trouble. But, when Corporal Eddie Birdlace meets Rose, an awkward and idealistic waitress whom he enlists to win a cruel bet with his fellow recruits, she rewrites the rules of the game and teaches him the power of love and compassion.

Based on the 1991 Warner Brothers film, Dogfight is packed with an unstoppable pop score, an unexpected love affair, and a genuine and charming message that takes audiences to new heights.

Don't see it if If you can’t appreciate a great score with clever lyrics, along with a story that can be insensitively disquieting. Read more

See it if You like quality theater in the heart of south Jersey. Great choreography, string acting, strong performances. A piece rarely performed.

Don't see it if You want a happy ending and the uplifting story. It's a downer with little opportunity for redemption. Strong adult language.

See it if You support local theater and aspiring performers

Don't see it if You don’t have 2 hours to spend at a show whose score is banal and repetitive. don’t expect Miss Siagon

See it if You want to root for the underdog. It's a feel good romance. Male and female leads were fabulous.

Don't see it if You're expecting high quality sets, costumes, casting, this is not the show.

See it if Small intimate theater experience with high quality acting and singing.

Don't see it if If you are looking for big chorus numbers and dance sequences. Read more

Don't see it if There were a LOT of curses in this show! Even in the lyrics. If that disturbs you, you should avoid this show.

Don't see it if War is a topic you cannot handle

See it if You like great singing, great acting and an unexpected love story

Don't see it if You can’t handle strong language or war scenes with loud gunfire and strobe lighting.

"'DOGFIGHT' at the Eagle Theatre is 'Some Kinda Time'"
Read more

"Pasek & Paul adapted ‘Dogfight’ for stage before they got famous. See it at Eagle Theatre now."
Read more